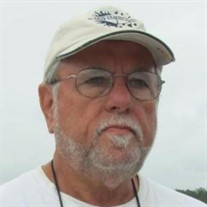 Richard Vaughn Geeslin, age 75, died on August 12, 2021 after a brief illness. He was born in Columbus, GA, the son of Harry T. Geeslin, Jr. and Carolyn V. Geeslin. Richard graduated from Columbus High School in 1965 and attended Columbus College and West Georgia College. He valiantly served our country in the US Army during the Vietnam War. He retired as a real estate manager for Lamar Outdoor Advertising in Tallahassee, Florida. Fishing, boating, hunting, and introducing young people to the love of the outdoors were activities he enjoyed. Survivors include his sister, Rebecca G. Beverly (Steve) of Jackson, TN, his brother, Randall P. Geeslin of Parrish, FL, an aunt and uncle, nieces and nephews, cousins, and many close friends. He was preceded in death by his parents. Memorial contributions may be made to The Gideons International, P.O. Box 173, Jackson, TN, 38302.

The family of Richard Vaughn Geeslin created this Life Tributes page to make it easy to share your memories.