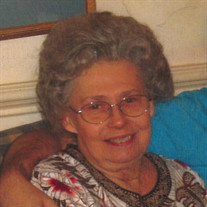 Rebecca “Becky Anne” Henderson Creasy, age 79, died on Sunday, November 18, 2018 at the Jackson Madison County General Hospital. A native of Madison County, Becky Anne was born on August 9, 1939, the daughter of the late Tolbert and Ruthie Pritchard Henderson. She attended Brown School and graduated from Northside High in 1957 completing her education with the West Tennessee Business College. She married Jerry Creasy in 1961 moving to Eglin Air Force Base in Western Florida. They later moved to Memphis, TN in the late 1960’s attending Southland Baptist Church where she and Jerry were baptized in 1968. In 1969 they moved to Jackson and became a part of Englewood Baptist Church, where she was a Sunday school teacher for many years. She was employed for thirty years as a loan officer with First Tennessee Bank and was a member of the Credit Professionals Association and taught finance classes. She was a member of the Lions Club serving in the former Northside Lions and later the Old Hickory Lions. She was preceded by her husband Jerry Creasy in 2010 and her son, Don Creasy in 2015. She is survived by her daughter, Karen Fish and husband Jimmy Fish, Jr. of Jackson, TN; eight grandchildren, Samantha Creasy, Hunter Creasy (Allison), Stephen Simpson, Jacob Simpson, Anna Cowan, Hazel Fish, Rainee Fish and Windie Fish and two great- grandchildren, Jobi Chandler and Hudson Creasy; a sister-in-law Nellie Moore of Three-Way, TN and a niece, Melinda Benedetto of Dyersburg, TN. SERVICES: A funeral service will be held at 11:00 AM Wednesday, November 21, 2018 in the chapel of Arrington Funeral Directors. Burial will follow in Ridgecrest Cemetery. The family will be receiving friends on Tuesday, November 20, 2018 from 4:00 PM until 6:00 PM and Wednesday, November 21, 2018 from 10:00 AM until 11:00 AM prior to the service at Arrington Funeral Directors Pallbearers for the service will be Hunter Creasy, Stephen Simpson, Jacob Simpson, Jimmy Fish, Sr., Jimmy Joyner and David Caldwell. Honorary pallbearers will be Lamar Seaton, Joe Joyner and Jimmy Hill. The family is requesting that memorial contributions be directed to Lions International, 300 W. 22nd Street, Oak Brook, IL 60523-8842. Arrington Funeral Directors, 148 W. University Parkway 668-1111 www.arringtonfuneralgroup.com

The family of Rebecca “Becky Anne” Henderson Creasy created this Life Tributes page to make it easy to share your memories.