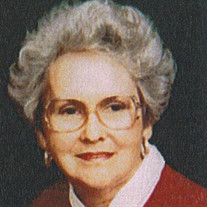 Reba L. David, age 88, died on Thursday, November 12, 2020 at Northbrooke Healthcare Center in Jackson, TN. Reba was born on August 5, 1932 in Lexington, TN, the daughter of the late John Floyd and Lessie Knowles Garner. She was married to Edward Douglas David who preceded her in death in 2003. She was a graduate of Union University in the inaugural nursing class. After graduation she began her career as an RN at Jackson Madison County General Hospital. She later worked at The ENT Clinic, before going to The Jackson Clinic where she served as a surgical assistant for thirty plus years. Reba was a life-long member of Calvary Baptist Church of Jackson. She enjoyed sewing, gardening, cooking for her family and time spent at the family’s cabin at the Tennessee River. She also loved to travel. She is survived by her two sons, Scott David and Barry David and his wife Jane all of Jackson, TN; three grandchildren, Megan David King and husband Bryce, Jordan David and wife Carley and Luke David and wife Elizabeth: and three great-grandchildren, Gaven David, Bennett King and Ivy Jane David. She was also preceded in death by a grandson, William David in 1988; three brothers, Milton Garner, Joe Garner, Fred Garner; and three sisters, Velma Bailey, Alice Poindexter and Beulah Garner. SERVICES: A graveside service will be held at 1:00 PM Monday, November 16, 2020 at Highland Memorial Gardens. The family will be receiving friends on Monday from 10:30 until 12:30 at Arrington Funeral Directors with social distancing being observed along with the wearing of masks. Pallbearers will be Jordan David, Luke David, Bryce King and Jeff Garner. The family is requesting that memorial contributions be directed to Calvary Baptist Church, 119 Oil Well Road, Jackson, TN 38305. Arrington Funeral Directors, 148 W. University Parkway 668.1111 www.arringtofuneralgroup.com

Reba L. David, age 88, died on Thursday, November 12, 2020 at Northbrooke Healthcare Center in Jackson, TN. Reba was born on August 5, 1932 in Lexington, TN, the daughter of the late John Floyd and Lessie Knowles Garner. She was married to... View Obituary & Service Information

The family of Reba L. David created this Life Tributes page to make it easy to share your memories.