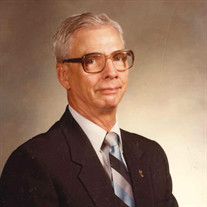 Dr. Raymond Kirby Lasley, age 99, died on Thursday, October 8, 2015 at Morningside Assisted Living. A native of Jackson and Madison County, he was born on February 24, 1916 the son of the late Thomas Raymond and Annie Day Lasley. He was married to Susie Brown Lasley who preceded him in death on December 18, 2002. He was a graduate of Huntersville High School in 1935. He worked for Milan Optical Company grinding lenses for two years before attending Optical school in Memphis, TN. He opened a practice in Savannah, TN in February 1941, and was drafted into the Army in November of 1941. He served in the Army from 1941 – 1945 as an optometrist. He worked in Bells and Ripley before he later set up a practice in Jackson, TN and worked there until his retirement in 1997. He was a member of the Masonic Lodge, the Optometric Association of North West Tennessee, the Tennessee State Optometric Association, the National Optometric Association, the American Optometric Association and the Rotary Club of Jackson. He is survived by his daughter, Susan Waldrop and husband Howard of Jackson, TN; a son, Dan Lasley and wife Julie of Cordova, TN; a brother, Bill Lasley and wife Betty of Jackson, TN; three sisters, Anne Shaw and Eleanor Haskins both of Jackson, TN and Sarah Ralls of Gilbert, AZ; two granddaughters, Regina Anderson and husband Michael and Crystal Presley and husband David and two great grandchildren, Madison Presley and Caleb Anderson. He was preceded in death by two brothers, Thomas Raymond Lasley, Jr. and Ed Lasley. SERVICES: A funeral service will be held at 3:00 PM Sunday, October 11, 2015 in the chapel of Arrington Funeral Directors with Rev. Jonathan Baine officiating. Burial will follow in the Andrew’s Chapel Church Cemetery in Huntersville, TN. The family will be receiving friends on Saturday, October 10, 2015 from 4:00 PM until 7:00 PM at Arrington Funeral Directors. Pallbearers will be Tommy Haskins, Lee Haskins, Clark Shaw, Brooks Shaw, Ronnie Lasley and David Presley. The family is requesting that memorial contributions be directed to the charity of the donor’s choice. Arrington Funeral Directors, 148 W. University Parkway, 668-1111 www.arringtonfuneralgroup.com

Dr. Raymond Kirby Lasley, age 99, died on Thursday, October 8, 2015 at Morningside Assisted Living. A native of Jackson and Madison County, he was born on February 24, 1916 the son of the late Thomas Raymond and Annie Day Lasley. He was married... View Obituary & Service Information

The family of Dr. Raymond Kirby Lasley created this Life Tributes page to make it easy to share your memories.