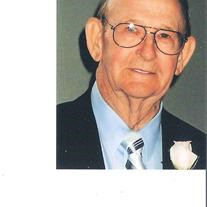 Charles Raymond JacksonFuneral services for Raymond Jackson will be held Monday, May 17, 2010 at 1:00PM at Calvary Church Ministries, Jackson, TN with Reverends Ronald Brown, Cliff Walker and Larry Michael officiating. Burial will follow at Highland Memorial Gardens.Mr. Jackson went to be with his Lord Jesus Friday, May 14, 2010 at age 90. He was born near Scotts Hill, TN on November 21, 1919, the 11th child of Martha Stewart Jackson and Madison Troy (Doc) Jackson. He attended Madison County Schools. He began work in the Bemis Cotton Mill on April 4, 1939. He received an award from the Bemis Company for a piece of equipment he designed to help the spinning frame function more efficiently. He retired April of 1983 as head over hauler with 44 years at the Bemis Cotton Mill later known as Tennessee Textiles.Raymond dedicated his life to Jesus Christ at the age of 14 in a revival led by A.D. Gurley at the Bemis Pentecostal Church. He was a faithful member of the Bemis Church where he served as Sunday school teacher of a young men?s class for a number of years. In 1941, then pastor, Rev. W.M. Greer, appointed him to the church board of deacons where he served for over 30 years. He was later a charter member of the Lighthouse Pentecostal Church.Raymond was gifted with the ability to maintain and repair anything around the house, a talent he also used to serve in the upkeep of the church buildings. He was a dedicated prayer warrior, a wise counselor, and an avid humorist, all of which nurtured and fortified his friends and family. His unwavering devotion to God?s family was an example to all who knew him.Raymond married Mary Candace Tharp October 25, 1941 in the home of Rev. A.D. Gurley who officiated and was witnessed by Rev. and Mrs. Judson Ivy, Grace Tharp and Dan Webb. Mary and Raymond walked together in an exemplary, loving relationship for over 68 years.He was preceded in death by his parents, Martha and Troy Jackson and seven brothers; Carl, Graydon, Ellis, Lathie, Coy, Gordon, and Floyd, three sisters; Hermie, Vera and Evy.Raymond is survived by his wife, Mary, one son Richard (Melba) Jackson of South Carolina, three daughters, Danita (Jerry) Sykes of Bartlett, Carole (Al) Gordon of Jackson and Gayla (Vernon) Morris of Franklin. He leaves behind ten grandchildren; Steven and Elizabeth Jackson, Jason and Janet Sykes, and Jill Terry, Evan Weaver, Holly Webb and Becky England, and Justin and Damon Morris. His legacy also includes seventeen great grandchildren.Those serving as pallbearers will be his grandsons Evan Weaver, Steven Jackson, Jason Sykes, Justin Morris, Damon Morris and Brett Gordon.The family has requested in lieu of flowers that memorial contributions be directed to The Building Fund of Calvary Church Ministries, 235 Moize Cut Off Rd., Jackson, TN 38305.The family will be receiving friends Sunday, May 16, 2010 from 2:00PM until 5:00PM at Arrington Funeral Directors and Monday, May 17, 2010 from Noon until service time at 1:00PM at the church.

The family of Raymond Jackson created this Life Tributes page to make it easy to share your memories.