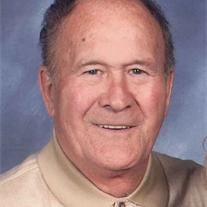 A funeral mass for Raymond R. Goethals, Jr, age 77, will be held at 3:00 PM Sunday, May 30, 2010 at St. Mary?s Catholic Church, with Rev. Monsignor Thomas Kirk officiating. Mr. Goethals died on Thursday, May 27, 2010 at the Jackson Madison County General Hospital. Arrington Funeral Directors is in charge of services.He was born in Mishawaka, IN, the son of the late Raymond E. Goethals, Sr. and Irene DeSlover Goethals. Mr. Goethals served as a radio operator in the Korean Conflict. He attended Indiana University and moved to Tennessee in 1974 working for P & D Facet Corp as manager of their Sales Department. In 1983, he started A-1 Chemical Products. He was a communicant of St. Mary?s Catholic Church of Jackson.He is survived by his wife, Geraldine ?Geri? Goethals, of whom he was married for the last 52 years; his son, Kyle Goethals and his wife Anne; his daughter, Kimberly Hatchett and her husband Keith; six grandchildren, Kelly, Trey and Meg Goethals and Shelby, Bailey and Brandon Hatchett all of Jackson; his sister, Joan Flock and her husband James of Fort Myers, FL.A Rosary service will be held at 7:00 PM Saturday, May 29, 2010 at St. Mary?s Catholic Church with visitation to follow until 9:00 PM.

The family of Raymond Goethals created this Life Tributes page to make it easy to share your memories.