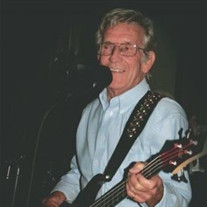 Romans 12:6-8, “In his grace, God has given us different gifts for doing certain things well.” My father, Rayburn Anthony, was blessed with the gift of music in abundance. Wherever he traveled, whether it was the distant shores of southern France, the ancient forests of Sweden, a rowdy pub in England, or simply a local church gathering, Rayburn never failed to touch people’s lives with his passion for music. The only thing that exceeded his love for music, was his love for his family. Rayburn always believed that when the world is against you, when nothing else is going right, you should always be able to depend on your family. That is the great man that he was, and that is the legacy he will leave behind. His physical form may be buried on April 25th; but, energy does not die, it transfers. A person’s soul, their heart, it transfers to all who are open to receiving it. Those who love and have been touched by Rayburn may not have been ready to see him go just yet, but we know, beyond a shadow of all reasonable doubt, that if the world could feel his energy, be his energy, that it would be a better place. Legacy. The dictionary would define it as a gift or a bequest, that is handed down, endowed or conveyed from one person to another. Although the concept is traditionally measured by wealth, recognition, prestige, acclaim, power or position, its true essence is the residue of a life well lived. For the joy and happiness that he bestowed upon an innumerable amount of people, the legacy of Rayburn Anthony will be felt for generations to come. The singer, songwriter, guitarist, and bassist has passed in Jackson, Tennessee—his hometown, which he helped put on the map as a music center—on Saturday, April 21st. The performer—an American poet, long-time ASCAP member, Sun Records original, and all-around beautiful soul who greatly contributed to the popularization of rock-n-roll—was such a musical inspiration that it is hard to believe his career only spanned six decades, just as it is painful to imagine a future without him. Rayburn was preceded in death by his parents, James and Rosie Anthony, his brothers, James Anthony Jr. and Roy Anthony, and his sisters, Virgie Mitchell and Patsy Cantrell. He is survived by his wife, Keata Anthony; brothers, Robert Anthony and Alton Anthony; his sister, Betty Flanagan; his eight children, Jeff Anthony, Sally Fitts, James Anthony, Kayli Kenton, Austin Anthony, Colin Anthony, and Summer Anthony; and stepson, Jordan Wright; ten grandchildren and six great-grandchildren. SERVICES: The family will receive friends and loved ones at a visitation to be held on Tuesday evening, April 24, 2018 from 4-6 p.m. at Arrington Funeral Directors. The funeral service is to be conducted on Wednesday afternoon, April 25, 2018 at 1 p.m. at Arrington Funeral Directors with Dr. Philip Jett of Englewood Baptist Church officiating. In keeping with his wishes, Rayburn will be buried at Liberty Grove Baptist Church. Arrington Funeral Directors, 148 W. University Parkway, Parkway, Jackson, TN 38305, 731.668.1111.www.arringtonfuneralgroup.com

Romans 12:6-8, &#8220;In his grace, God has given us different gifts for doing certain things well.&#8221; My father, Rayburn Anthony, was blessed with the gift of music in abundance. Wherever he traveled, whether it was the distant shores... View Obituary & Service Information

The family of Rayburn Thomas Anthony created this Life Tributes page to make it easy to share your memories.