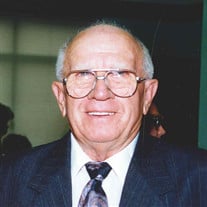 Ralph Paul McAlexander Funeral services for Ralph Paul McAlexander, 85, will be held Friday, December 12, 2014 at 1:00 PM in the chapel of Arrington Funeral Directors. Burial will follow at Hickory Flat Cemetery. Mr. McAlexander died Tuesday morning at Regional Hospital in Jackson surrounded by his family. He was born in Madison County in the Spring Creek Community, the son of the late Lerlin and Floyd McAlexander. He married the late Mary Frances McAlexander, his high school sweetheart, and they made their home in the Spring Creek Community for 13 years. They had two sons, Joel McAlexander and the late David McAlexander. Hickory Flat United Methodist Church was his family church, where Paul was active in Sunday School and was the Sunday School Superintendent for many years. When Paul was a young teen in the early 1940’s, he remembered the men in the church wanted to build a new brick church and they thought they could do most of the labor. His Grandpa, Mr. Will McAlexander, donated the land and they built a nice church with a basement, six Sunday School rooms and a fellowship hall. After Paul and Frances were married in the old church, it was torn down and the lumber was used to build a home in Spring Creek where he and his wife lived for 13 years and where his sons were born. Hickory Flat United Methodist Church is still active today in the same building on Highway 70 East with a beautiful cemetery next to it. Mr. McAlexander worked in sales for R.C. Bottling Company and was a Junior Engineer for Conalco Aluminum for many years. After Conalco closed in Jackson, he worked with his son and grandson at McAlexander Engineering & Development until his retirement. He was also an apartment owner and manager. His real joy in life came from fishing, watching the Tennessee Volunteers and spending time with his sons, grandchildren and great grandchildren, whom he loved very much. Mr. McAlexander was preceded in death by his beautiful wife of 61 years, Mary Frances McAlexander; two sisters, Opal Alexander and Reba Franklin; two brothers, Walter McAlexander and Clyde McAlexander; one son David McAlexander and one grandson Jason McAlexander Morris. Those left to cherish his memory are his son Joel McAlexander and Debbie Sullivan of Jackson, TN; three grandchildren, Shane McAlexander and wife Nikki, Cindy McAlexander Miller and husband Collin, and Stan McAlexander Morris all of Jackson; six great grandchildren, Sterling Duncan, Stone McAlexander, Slayde McAlexander, Cade Miller, Cash Miller and Lexee Morris; and Nancy McAlexander who was always a dear friend. Those serving as pallbearers are Shane McAlexander, Collin Miller, Stan Morris, Wendell McAlexander, Carney Clifft and Brent Brush. The family has requested that memorial contributions be directed to Hickory Flat United Methodist Church, 4020 US Highway 70, Cedar Grove, TN 38321. The family will be receiving friends Thursday December 11, 2014 from 4:00 PM until 6:00 PM at the funeral home.

The family of Ralph Paul McAlexander created this Life Tributes page to make it easy to share your memories.