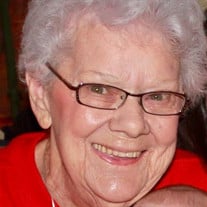 Pauline Fay (P.Fay) Lorentz, age 93, died on Monday, January 22, 2018 at the Northbrooke Healthcare Center in Jackson, TN. P. Fay was born in Murphysboro, IL on September 21, 1924, the daughter of the late Daniel M. and Gertrude M. King Anderson. She was married to George “Woody” Lorentz who preceded her in death in 1972. She was a retired bookkeeper having worked for several businesses in Illinois and Tennessee before retiring with the Old English Inn in Jackson. She was a communicant of St. Mary’s Catholic Church. She was an honorary member of the Elks and Merrymakers. She was a former Girl Scout leader, DBS Sorority Mom, and room mother at St. Andrew. She was very involved in politics having served as a Democratic precinct committee woman. She was an avid golfer having won numerous awards including the Club Championship in Madison, IN and a hole in one. She is survived by two daughters, Carole J. Graff and husband Bill of Glen Carbon, IL and Kay A. Pruett and husband Wayne of Jackson; grandchildren Dan Graff and wife Nicole of South Bend, IN, Jeff Graff and wife Elizabeth of St. Louis, MO, and Tiffany Bolton and husband John of Keller, TX, and five great grandchildren, Ellie Graff, Lizzie Graff, Sloane Bolton, Beckett Bolton and Dylan Graff. She was preceded in death by two sisters, Mary Cox and Viola Austin. SERVICE: A Rosary will be held at 4:30 PM Thursday, January 25, 2018 in the chapel of Arrington Funeral Directors with a visitation to follow until 7:00 PM. A funeral mass will be held in Murphysboro, IL at 10:00 AM Saturday, January 27, 2018 at St. Andrew Catholic Church, with Father Gary Gummersheimer officiating. Burial will follow in St. Andrew Cemetery. The family is requesting that memorial contributions be directed to the Elks Lodge Breast Cancer Awareness Fund, 28 Executive Drive, Jackson, TN 38305 or to St. Mary’s Catholic Church, 1665 Hwy 45 Bypass, Jackson, TN 38305. Arrington Funeral Directors, 148 W. University Parkway 668-1111 HYPERLINK "http://www.arringtonfuneralgroup.com" www.arringtonfuneralgroup.com

The family of Pauline Fay Lorentz created this Life Tributes page to make it easy to share your memories.