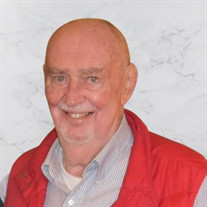 Parnell Landers entered his heavenly home on Wednesday, April 13, 2022, at the age of 89. A life-long resident of Madison County, TN, he was born on January 26, 1933, the son of the late Thomas Jackson and Molly Harris Landers. Parnell loved music and enjoyed playing his guitar up until the last few years. His family was his passion, and he took immense pride in being a loving husband, father, and grandfather to his family. He also enjoyed camping and woodworking. Parnell spent over thirty years with the State of Tennessee as a City Planner and later served as the City Planner for the City of Milan, TN. In his retirement years, he joined R.H. Hickman Realty Company. He was a member of the Independence Church of Christ. Parnell is survived by his wife of sixty-one years, Jane Hutson Landers of Jackson, TN; two daughters, Pam Landers Foutch (Joey) and Kim Landers Mansfield (Curtis Jr.); three grandchildren, Chad Foutch (Kelia), Taylor Jane Fuller (Jacob) and Casey Mansfield (fiancé Hunter), and three great-grandchildren, Layleigh and Lylah Foutch, and Ava Jane Moore. Other than his parents, he was preceded in death by his brother, Charles Landers; two sisters, Virginia Caviness and Helen Todd, and a great-grandchild, Ellie Foutch. SERVICES: A Graveside service will be held at 2:00 PM Friday, April 15, 2022, at Independence Cemetery, Lexington, TN, with David Sellars, minister, officiating. There will be no public visitation. Online condolences can be made at https://www.arringtonfuneralgroup.com. The family is requesting that memorials be directed to St. Jude’s Children’s Hospital, PO Box 1000, Department 142, Memphis, TN 38148 or online at stjude.org or to Friends of Heart, c/o The Foundation, 74 Directors Row, Jackson, TN 38305 or online at friendsofheart.org. Arrington Funeral Directors. 148 W. University Parkway, Jackson, TN 38305 731.668.1111 www.arringtonfuneralgroup.com Memorial contributions can be made here: https://joingenerous.com/arrington-memorial-parnell-landers-0oeidq5

Parnell Landers entered his heavenly home on Wednesday, April 13, 2022, at the age of 89. A life-long resident of Madison County, TN, he was born on January 26, 1933, the son of the late Thomas Jackson and Molly Harris Landers. Parnell loved... View Obituary & Service Information

The family of Parnell Landers created this Life Tributes page to make it easy to share your memories.