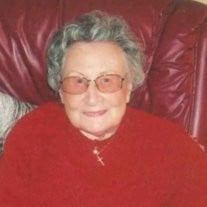 A home going service for Pansy Pauline Robinson Cowsert, 91, will be held at 2:00 PM Monday, August 5, 2013 in the chapel of Arrington Funeral Directors with her son-in-law, Rev. Glynn Jones officiating. The family will be receiving friends from 12:00 PM until the time of service. Interment will follow in Oak Hill Cemetery in Selmer, TN with a committal service to be held at 4:30 PM. Mrs. Cowsert died Saturday, August 3, 2013 after an extended illness, surrounded by her family in her home. Pansy was born to Du and Pauline Robinson in Selmer, TN on May 24, 1922. Pansy completed her education in the McNairy County Schools, and attended Business College in Nashville. It was there she met and married Meldon Cowsert. After a period of time in Nashville, Selmer, Mayfield, KY, and Clarksville, TN, they ultimately made their home in Jackson, TN. While Meldon sold millwork, Pansy was a bookkeeper and devoted homemaker. Meldon and Pansy were members of Highland Heights United Methodist Church, where both served in leadership positions. As a couple, they were charter members of St. Andrew United Methodist Church. Pansy was a faithful member of the Easter Star, serving in several different leadership positions. Preceding Mrs. Cowsert in death was her husband of almost sixty-eight years, Meldon, her parents, Pauline and Du Robinson, her brother, Rebon Robinson and a great grandson, Briley Len Davis. Mrs. Cowsert is survived by a daughter, Pam Jones and her husband Glynn, granddaughter, Amye Davis and husband Len, all of Jackson and Ashley Dismuke and husband Craig of Germantown, TN; and great grandchildren, Carley and Brett Davis and Madison, Lindsey and Ingram Dismuke. Also surviving is one sister, Lou Moore of Memphis, TN along with several nieces and nephews. The family is requesting that memorial contributions be directed to St. Jude’s Children’s Research Hospital, “Team Ingram” 262 Danny Thomas Place, Memphis, TN. Arrington Funeral Directors 148 W. University Parkway 731/ 668-1111 www.arringtonfuneralgroup.com

A home going service for Pansy Pauline Robinson Cowsert, 91, will be held at 2:00 PM Monday, August 5, 2013 in the chapel of Arrington Funeral Directors with her son-in-law, Rev. Glynn Jones officiating. The family will be receiving friends... View Obituary & Service Information

The family of Pansy Robinson Cowsert created this Life Tributes page to make it easy to share your memories.