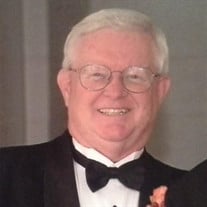 Oscar Davis “Buddy” Ryan received his call from the Lord on Saturday, March 18, 2017. Buddy Ryan was born on December 29, 1942 on Nashville, TN to the late Oscar Davis “Buddy” Ryan, Jr. and Dorothy Carlton Ryan. He was a 1960 graduate of Clarksville High School in Clarksville, TN, where he served as manager of both the football and basketball teams. Buddy was a proud Alumnus from Austin Peay State College. He married his high school sweetheart, Brenda Douglas, in August of 1962. Buddy began his career in insurance with Richards, Scott & Lyle Agency in Nashville and later worked as an adjuster with both CAN and The Travelers Ins. Companies. He moved to Jackson, TN in 1974 to join the Simmons and Masoud Insurance Agency. In 1980 he partnered with his longtime friend Jack Davis to form the Ryan & Davis Insurance Agency. Buddy was a member of Northside United Methodist Church and a member of Masonic Lodge # 332 in Jackson, Al Chymia Shrine Temple in Memphis, the Scottish Rite and York Rite Temples in Memphis, the Royal Order of Scotland, and the Jackson Motor Corps unit from the Jackson Shrine Club. He served as President of the Jackson Shrine Club in 1985. Mr. Ryan is survived by his wife of fifty-four years, Brenda Douglas Ryan of Jackson, TN; his children, Oscar Davis Ryan IV and wife Robyn of Jackson, TN and Michele Ryan Terry and husband Scott of Medina, TN; four grandchildren, Hunter Terry and wife Shelby of Milan, TN and Holden Terry of Medina, TN and Sarah-Kate Ryan and Genevieve Grace Ryan of Jackson, TN and two great-grandchildren, Avree Terry and Walker Terry of Milan, TN. SERVICES: A funeral service will be held at 1:00 PM Wednesday, March 22, 2017 at Northside United Methodist Church with Dr. Don Thrasher officiating. Burial with Masonic Rites will follow at Ridgecrest Cemetery. The family will be receiving friends on Wednesday from 11:00 AM until 1:00 PM at Northside United Methodist Church prior to the service. Any memorials may be sent to The Alzheimer’s Association, 4825 Trousdale, Suite 220, Nashville, TN 37220 or to Northside United Methodist Church, 2571 N. Highland Ave., Jackson, TN 38305. Arrington Funeral Directors, 148 W. University Parkway 668-1111 www.arringtonfuneralgroup.com

The family of Oscar Davis "Buddy" Ryan created this Life Tributes page to make it easy to share your memories.

Oscar Davis “Buddy” Ryan received his call from the Lord on Saturday,...