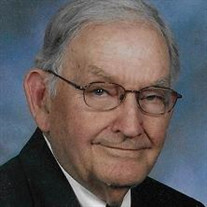 Ralph Smith, 92, died Sunday, December 10, 2017, at Jackson Madison County General Hospital. He was born August 17, 1925 in Pine Bluff, AR the son of the late Oren Oscar and Mamie Taylor Smith. He married Jerry Carolyn Wilson on August 3, 1956. He was a veteran of WWII serving in the United States Army. He was a graduate of the University of Arkansas and his career included school teacher, grain salesman, employee of the farm credit system, and a Realtor in the Jackson area. He was associated with Land Office Realtors for many years. He was an avid fox hunter, outdoorsman and very active member of First Cumberland Presbyterian Church, where he served as a Sunday school teacher and an elder. Ralph is survived by two sons, Walter Smith (Beverly) of Jackson, TN, Marcus Smith (Kris) of Lancaster, PA, one daughter, Cathy Matlock (Jim) of Jackson, TN, one brother, Cleoh Smith (Joan) of Oklahoma City, OK, his five grandchildren, Nick Matlock, Kevin Matlock, Brian Matlock, Andrew Smith, Katie Pritchard, and four greatgrandchildren, Lucy Matlock, Brinley Pritchard, Blakely Pritchard, and Taylor Smith. He was affectionately known as “Paw Paw” by both grandchildren and greatgrandchildren. He was preceded in death by his wife of 58 years, parents and one granddaughter Natalie Nicole Smith. SERVICES: Funeral services will be held Thursday, December 14, 2017 at 1:00PM at First Cumberland Presbyterian Church with Rev Terry Hunley officiating. The family will be receiving friends prior to the service from 11:00AM until 1:00PM. Burial will follow with military honors at Ridgecrest Cemetery. The family has requested that memorial contributions be directed to First Cumberland Presbyterian Church, 1730 Highway 45 By-Pass, Jackson, TN 38305.

The family of Oren Ralph Smith created this Life Tributes page to make it easy to share your memories.