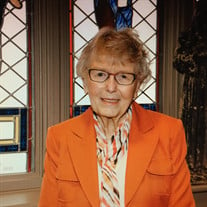 Norma May Barkley was born on July 19, 1927 to Erle and May (Hays) Barkley in Grinnell (Poweshiek County), Iowa. She was the oldest of four, with her two sisters, Barbara and Jean, and her brother, Keith. As a young girl, Norma enjoyed school and helping take care of the household with her mother and sisters while her father and brother tended to the family farm. At the age of 18, Norma enrolled at Iowa State as a Home Economics major. She was a beautiful and vibrant young woman who excelled at her studies. It is no wonder that she caught the eye of a handsome young Naval ROTC student, Jim Greer, and that after a first date he declared to a friend that he had met the woman he was going to marry. Norma and Jim were married on August 19, 1949 in the family home in Grinnell, Iowa. Norma and Jim raised four children, Mark, Chris, Catherine, and Anne. As a growing family, they lived in several different places depending upon the request of the U.S. Navy including Newport, Rhode Island; Madison, Wisconsin; San Diego, California; Honolulu, Hawaii; and Temple Hills, Maryland. In each place, Norma always found great friends and neighbors and was active as a Naval officer’s wife as well as a volunteer at the local Episcopal Church, various charities and in the busy lives of her children. While in Maryland, Norma volunteered at the Smithsonian Institute’s Archeology and Paleontology Departments in Washington, D.C. and participated in several historical digs. Upon Jim’s retirement from the Navy, Norma, Jim, Catherine, and Anne moved to Elk Rapids, Michigan in pursuit of Jim’s second career as a 4th grade school teacher. While in Michigan, Norma worked as a legal secretary who ran a lawyer’s office and eventually took over as the owner of Terra Title Company. Norma’s faith was integral to her existence as demonstrated by her volunteerism and outreach wherever she lived. She was presented with the Episcopal Bishop’s Service Cross in 1980 for her tireless dedication and assistance to the congregation of St. Paul’s Church in Elk Rapids, Michigan where she served as the first female Senior Warden in the Episcopal Diocese of Western Michigan. Norma was a 25-year member of the St. Luke’s congregation in Jackson, Tennessee where she participated in the alter guild and was president of the ECW (Episcopal Church Women) organization. Norma always gave credit to her Christian faith as the source of the strength she needed when she lost her beloved son, Mark, in 1978 and then husband, Jim, in 2001. She was what today might be called progressive in her beliefs, although to her it always made sense to welcome everyone to Christ’s table, regardless of gender, ethnicity, skin color or choice of life partner. Later in her life, Norma began another form of worship by studying icon painting. She gained a well-deserved reputation as an inspired iconographer with many of her transcendently beautiful icons presented to family, friends, and congregations. Norma had a true zest and appreciation for life. She was one of the least judgmental people ever and always saw beyond a person’s external trappings into the true core of their being. She loved history and became a dedicated student of genealogy long before the internet, combining vacations with side trips to county courthouses, libraries, cemeteries, and the Mormon Family History Library in search of the Barkley family history. She had an inquisitive mind and was a constant learner who spent 25 years as a member of the Jackson Mutual Improvement Club. She was an avid reader and gifted writer and the go-to person in the family for any questions of spelling, grammar or editing. Norma was a loyal friend who always kept her friends in her heart and her prayers. She had a keen sense of humor – always witty, sometimes wicked, but never cruel - and possessed an infectious laugh. She was adventuresome as well; few people know that she soloed in a J-3 Piper Cub and operated as the navigator for her and Jim’s many cross-country flights in their Cessna 177 Cardinal. Norma and Jim shared a love story lasting 52 years, although each would say that wasn’t nearly long enough. Norma’s legacy will be the dedication she had to her marriage, the unending love that she had for her family, and the immense pride she held for her children’s and grandchildren’s accomplishments. Norma’s memory will be cherished by her three children and their spouses, Christopher (Michal Cohen) Greer of Austin, TX, Catherine (Matt McClelland) Greer of Oakland, CA, and Anne (Michael) Armour of Spring Lake, MI. She will also be remembered with great love, respect and appreciation by her six grandchildren, Brooks (Chad) Wellmon, Jennifer (John) Steele, Matthew (Rachel) Greer, Benjamin Armour, Mark Armour and Meredith Armour, as well as six (soon to be eight) great-grandchildren. Norma’s family invites all who knew her to be joyous, both in the celebration of her life and that which awaits her in heaven. A memorial service for Norma will be held at St. Luke’s Episcopal Church in Jackson, TN at 11:00 AM on Saturday, February 25th, 2017. The family will receive friends beginning at 10:00 AM and continuing until service time in the Commons of St. Luke’s. The family requests that memorial contributions in memory of Norma be made to Redemption Road Horse Rescue, 130 Cooper Anderson Rd., Jackson, TN 38305.

Norma May Barkley was born on July 19, 1927 to Erle and May (Hays) Barkley in Grinnell (Poweshiek County), Iowa. She was the oldest of four, with her two sisters, Barbara and Jean, and her brother, Keith. As a young girl, Norma enjoyed school... View Obituary & Service Information

The family of Norma May Barkley Greer created this Life Tributes page to make it easy to share your memories.