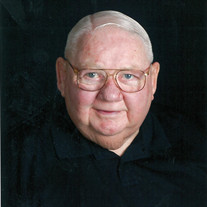 Murry Exum, 73, died on Wednesday, February 14, 2018 at his Jackson, TN residence surrounded by his family. Murry was born November 30, 1944 to the late Felix Clifton Exum, Sr. and Myrl Evans Exum in Jackson, Tn. He married Alice Day on Nov.15, 1963. They celebrated their 54th anniversary. Murry started his car sales career in Dec. 1966 when he began working at Jim Miles Olds and Cadillac on Church St. in downtown Jackson. He followed his passion of selling Cadillac's to Serra of Jackson when they bought the franchise and stayed with them until his retirement July 31, 2015. He had numerous loyal customers and made many lasting friendships during his tenure in the car business. Many people referred to him as "Mr. Cadillac". He was educated in Madison County Public Schools and was a 1962 graduate of Northside High School and attended Lambuth College. He was a member of the Boy Scouts of America and received his Eagle Scout and God and Country Award. His grandsons Blake and Brent followed in his footsteps and received their Eagle Scout awards also. Murry served in the Tennessee National Guard and was honorably discharged in Feb. 1972. He was a member of the Loyal Order of Moose, Elks Lodge, F.O.P. and deputy sheriff, West Tennessee Traffic Club, a lifetime member of the Jackson Jaycees and served as president 1970-1971. He is a Jaycee I Senator, Colonel of the Volunteer Corp #126. Murry was a founding member of the Old Hickory Street Rod Club which later became Jackson Rod & Custom car club. He served as President of this club from 1992 until 2014. He was on the Board of Directors of the Miss Tennessee Pageant serving as chairman of the Hospitality Room and was a member of the West Tennessee Coon Club. Other than his wife, he leaves his daughters, Debbie Ashworth and husband Jube of Jackson, Cindy Werner and husband Mark of Medina, granddaughter Brooke Bowen and husband Cal of Gallatin, grandsons Blake and Brent Werner and great-grandchildren, Ethan, Christopher and Emma Marie Bowen and a brother, Clifton Exum and his wife Dot of Jackson. SERVICES: A funeral services will be held at 11:00 AM Saturday, February 17, 2018 in the chapel of Arrington Funeral Directors, with Rev. Steven Douglas officiating. Burial will follow in Browns Cemetery. The family will be receiving friends on Friday, February 16, 2018 from 4:00 PM until 7:00 PM and on Saturday, February 17, 2018 from 10:00 AM until the service at 11:00 AM at Arrington Funeral Directors. Pallbearers will be Lyn Thomas, Blake Werner, Brent Werner, Cal Bowen, Don Carloss, Jr., Roy Morgan, Jr. and Ashley McCullar. In lieu of flowers, it was his request that memorials be donated to the Dream Center, 1970 N. Highland Ave., Suite E Jackson, Tn. 38305 or Mt. Carmel Methodist Church, 2930 Highway 70 E, Jackson, Tn. 38305. Arrington Funeral Directors, 148 W. University Parkway 668-1111 www.arringtonfuneralgroup.com

The family of Murry E. Exum created this Life Tributes page to make it easy to share your memories.