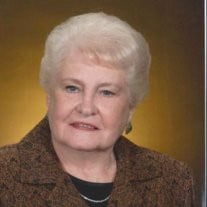 Mona Pulliam Bailey, 84, of Jackson, passed away peacefully in her sleep, surrounded by her immediate family, on December 27, 2013. She will be remembered as a loving wife to her husband of sixty-three years, William (Bill) Bailey, and a devoted mother to her two sons, Gregory Bailey of Medina, TN and Robert Bailey (wife Breon and son Liam) of Truro, MA, as well as one daughter/granddaughter, Anastasia (Anna) Bailey Kidd (husband Chad Kidd) of Boston, MA. Two nephews also survive Mona: Donald Foote (wife Laura and son Andy) of Jackson and Tony Foote (wife Lana and daughter Renee Blankenship) of Jackson, as well as one niece, Ginger Foote Austin (husband Kenneth Austin and daughter Gina Thompson of Mercer, TN. Her surviving stepbrother is Jack Foote (wife Bessie and daughters Susan Haubold and Janice Pyron of Jackson. Mona was born on September 11, 1929, in Effingham, IL. Her parents were Tona Pulliam and Agnes Eckert Pulliam of Dietrich, IL. Her parents and her only sister, Virginia Pulliam Foote, as well as her brother-in-law, Henry Foote of Mercer, TN preceded her in death. Mona graduated from Mercer High School in 1948 and later attended West Tennessee Business College before going to Washington, D.C., to work for the Federal Bureau of Investigation (FBI). Mona was an avid homemaker and loved to golf, bowl, play Canasta and read. She was a compassionate lifelong animal lover, rescuing many abandoned animals, particularly cats, through the years. Over the past decade Mona also enjoyed spending social time with the New Jacksonians organization. She was a member of the Northside United Methodist Church for over twenty-five years. Moving nine times during Bill’s tenure as an FBI agent, they attended many different churches over the years, and Mona was always active in them. She taught Sunday school and connected with the many women’s groups of those churches. She will be missed, but never forgotten. SERVICE: A funeral service will be held on Monday, December 30, 2013 at 2:00 PM in the chapel of Arrington Funeral Directors with Dr. Don Thrasher officiating. Burial will follow in Highland Memorial Gardens. Visitation with the family will be held on Monday, December 30, 2013 from 12:00 PM until 2:00 PM prior to the service. In lieu of flowers donations can be directed to Northside United Methodists Church 2571 N. Highland Ave. Jackson, TN 38305 or the Jackson Madison County Humane Society 23 Pinnacle Drive, Jackson, TN 38305. Arrington Funeral Directors 148 W. University Parkway 668-1111 www.arringtonfuneralgroup.com

Mona Pulliam Bailey, 84, of Jackson, passed away peacefully in her sleep, surrounded by her immediate family, on December 27, 2013. She will be remembered as a loving wife to her husband of sixty-three years, William (Bill) Bailey, and a devoted... View Obituary & Service Information

The family of Mona Pulliam Bailey created this Life Tributes page to make it easy to share your memories.

Mona Pulliam Bailey, 84, of Jackson, passed away peacefully in...