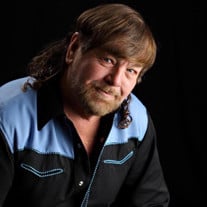 Michael Stephen Williams, 68, of Jackson, TN passed away on Tuesday, June 15, 2021, at his residence in the company of his adoring family. Michael was born on Sunday, September 7, 1952, in Muskegon, Michigan to the late Woodrow Wilson Williams and Mary Helen (Hamblen) Williams. Other than his parents he was also preceded in death by a daughter, Tonya Burney and a grandson, Dalton Burney. Michael met the love of his life Donna Kay Ping and eventually joined her in marriage on April 26, 1969. They shared many joyous years together and made their family complete with the addition of a son, Michael, Jr., and a daughter Tonya.. Michael loved the Lord and was an active member at the Oakfield Baptist Church until his life was interrupted by his fight against cancer. Michael was a man of many talents. He enjoyed riding his Harley Davidson motorcycles, collecting and restoring Ford trucks, and playing and recording music. He was a talented musician who loved playing the guitar. He relished any time he was able to spend gathered with his family and friends, and always welcomed the opportunity to spend time with his treasured grandchildren. Michael is survived by his devoted wife, Donna Williams of Jackson, TN; 1 son, Michael Williams, Jr., and wife Heather of Toone, TN; a brother, Bobby W. Williams and wife Janie; a sister, Donna Wallace and husband Tommy; 4 grandchildren, Amanda Burney, Dallis Williams, Alexis Williams, and AnnaBeth Williams as well as many other family and friends who mourn his passing. Friends and family will be received at Arrington Funeral Directors on Saturday, June 19, 2021, from 11:00 a.m. until 1:00 p.m. A funeral service will be held at 1:00 p.m. at Arrington Funeral Directors with Bro. Mickey Jackson officiating and interment to follow in the Ridgecrest Cemetery in Jackson, TN. Active Pallbearers will be Tyler Bizzell, Jimmy Hughes, Jay Western, Jack Bedford, Randy Cochrum, and Tommy Wallace while Bobby Morgan, Michael Simpson and Tony Wiley were named Honorary Pallbearers. Memorials may be made to the St. Jude Children’s Research Hospital, 501 St. Jude Place, Memphis, TN 38105 or online at: www.stjude.org Online condolences can be made at https://www.arringtonfuneralgroup.com. Funeral arrangements were trusted to Arrington Funeral Directors & Crematory, 148 West University Parkway, Jackson, TN 38305-1616, (731) 668-1111.

Michael Stephen Williams, 68, of Jackson, TN passed away on Tuesday, June 15, 2021, at his residence in the company of his adoring family. Michael was born on Sunday, September 7, 1952, in Muskegon, Michigan to the late Woodrow Wilson Williams... View Obituary & Service Information

The family of Michael Stephen Williams created this Life Tributes page to make it easy to share your memories.

Michael Stephen Williams, 68, of Jackson, TN passed away on Tuesday,...