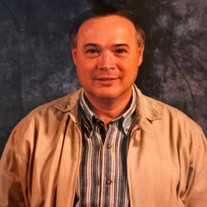 Michael O’Neal “Mike” Cisco Michael O. “Mike” Cisco, a life-long resident of Bemis and Jackson, TN, passed away on Thursday evening, November 12, 2020 at his home under the care of hospice. Mike was born on August 14, 1950, as the first caesarian birth in the new Jackson Madison County General Hospital. His parents were the late James W Cisco, Sr. and Mary Buckingham Cisco. He was a graduate of South Side High School, Jackson State Community College and Union University with a Bachelor of Science Degree. He was formerly employed with American Olean Tile for over twenty-five years and later for All Steel at their Jackson and Milan facilities. He retired from Perseus Distribution in 2017. Mike and his wife Glenda rode and showed Quarter Horses for many years throughout West Tennessee. He was a member of Highland Park Church and a former Rotarian. Along with his parents, he was preceded by his brother, James W. “Jimmy” Cisco, Jr. and his sister, Sherry Lynn Cisco. Mike is survived by his wife of 47 years, Glenda Smothers Cisco, and his son, Brent Cisco and his girlfriend, Jessica Ing Bennett; granddaughter, Kimber Elizabeth Cisco; sister-in-law, Brenda McMurry, and brother-in-law, Junior L. Smothers and several nieces and nephews. SERVICES: A visitation and memorial service will be held on Sunday, December 13,2020 from 1:00 PM until 3:00 PM with the memorial to follow at 3:00 PM in the chapel of Arrington Funeral Directors. The family is requesting that in lieu of flowers that memorial be directed to Tennessee Death Row Dogs Rescue (TDRD) c/o Teresa Creech Stutts, Pres., 1148 West Point Road, Lawrenceburg, TN 38464 or pay-pal to [email protected] Arrington Funeral Directors, 148 W. University Parkway, 731.668.1111 or www.arringtonfuneralgroup.com

The family of Michael O'Neal "Mike" Cisco created this Life Tributes page to make it easy to share your memories.