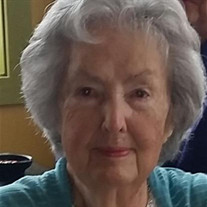 Visitation for Mary Elizabeth New will be Sunday, October 23 from 4:00-6:00 at Arrington Funeral Home and a celebration of her life will be Monday, October 24 at 1:00 also at Arrington. Mary died on Wednesday, October 19, 2016, with family and friends by her side. Mary was a Texan through and through, born March 2, 1926, the youngest child of Ziska Valpy and Elizabeth Emma Barker in Fort Worth, Texas. Growing up with four older brothers during the depression years, she became an adventurous and independent young lady. Mary accepted Jesus Christ at a young age, and served Him faithfully her entire life. She enjoyed sports and excelled in academics, even learning Morse Code and remembering it well into her eighties. At the age of 20, she obtained a degree from Texas Tech with a double major in English and mathematics. After graduation she taught math at the University of Tulsa to classes filled mostly with GIs returning from the war. Shortly after WWII Mary was introduced to her best friend’s brother, Joe New, who had just returned from the China Burma India theater in the war. He treated her to a Coca-Cola and became the love of her life in a marriage that lasted almost sixty-seven years until his death in May 2013. In their early marriage Mary worked as a chemist for Shell Oil Company. She later chose to be a stay-at-home mom to raise her four children: Linda, Janice, Judy, and Paul. She actively participated in the Gideons Auxiliary for over sixty years, volunteered at Regional Hospital in Jackson for many years, and was a faithful member of Believer’s Fellowship. At the age of sixty-two, she obtained her pilot’s certificate. Mary was a lover of puzzles and games, an avid reader, and enjoyed nature and wildlife. An excellent cook, creating experimental casseroles was her specialty. She enjoyed working alongside her husband in all their business endeavors including Tennessee Aircraft Services that they started in 1975 and continues today by their son. She was a true hostess in every area of her life from family to friends as well as the community. She will be missed by her children: Linda Grisham, Janice (Billy) McWilliams, Judy Rowe, Paul (Helen) New; her grandchildren Jeff (Dee) Grisham, Todd (Alyson) Grisham, Wendy Grisham, Michele Rowe, Kevin (Angela) Rowe, Lana (Tony) Hirsch, Jared New, Lydia New; ten great-grandchildren, wonderful friends and extended family. Preceding her in death includes her parents, her brothers: Melton, Bruce, Perry, Jabus, son-in-laws James Grisham and Raymond Rowe, and great-grandson Luke Hirsch. She will be remembered for her quick wit, great wisdom, gentle kindness and encouraging spirit. Arrington Funeral Directors, 148 W. University Parkway 668-1111 www.arringtonfuneralgroup.com

Visitation for Mary Elizabeth New will be Sunday, October 23 from 4:00-6:00 at Arrington Funeral Home and a celebration of her life will be Monday, October 24 at 1:00 also at Arrington. Mary died on Wednesday, October 19, 2016, with family... View Obituary & Service Information

The family of Mary Elizabeth New created this Life Tributes page to make it easy to share your memories.

Visitation for Mary Elizabeth New will be Sunday, October 23...