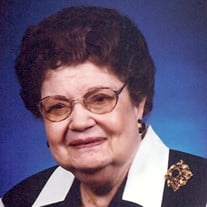 Mary Osalean “Ossie” Hensley, 96, died Sunday March 1, 2015 at Regional Hospital of Jackson. She was born July 6, 1918 in Deanburg, TN the daughter of the late Walter Guy Bell and Minnie Estelle Marsh Bell. She was a member of the Bemis United Methodist Church for 87 years where she had served as a children’s department Sunday school teacher and as President of the Wesleyan Service Guild. Mary was a member of the Order of Eastern Star, Jackson Chapter #85, since 1961 when she, her husband, and their daughter joined as a family. She served in numerous offices, including Chaplain and Worthy Matron. She was the 1990-’91 Tennessee Grand Chapter Representative to Illinois and a past president of the Gavel Club. She and her late husband traveled with special friends to many states to attend General Grand Chapter sessions. She was an employee of Rosenblooms until it closed. She is survived by her daughter, Carroll Gallimore and her husband Rev. Russell Gallimore of Jackson, TN; three grandchildren: Stanley, Glenn and Kevin Gallimore, all of the Memphis area; six great-grandchildren: Noyel and Navin Gallimore, Portland, OR; Griffin and Kaitlyn Gallimore, Lakeland; Macy and Vann Gallimore of Southaven, MS; one step-great-granddaughter, Melanie Holmes and one step-great-great-granddaughter, Mercedes Compton of Memphis. She was preceded in death by her husband William Elco Hensley to whom she was married for 59 years. The family offers special thanks for the devotion and loving care of her personal sitters: Brenda Hazelwood, Betty Whitaker, and Marilyn Cole; the staff of Morningside of Jackson, Stacie Owen and Tonya Volner of Avalon Hospice and the third floor personnel of Regional Hospital of Jackson. SERVICES: Funeral service for Mrs. Hensley will be held 3:00 PM Sunday March 8, 2015 at Arrington Funeral Directors with Rev. Russell Gallimore and Rev. Sharon Lewis-Karamoko officiating. Burial will follow in Highland Memorial Gardens. The family will receive friends Sunday March 8, 2015 from 1:00 PM until 3:00 PM at the funeral home. Memorials may be directed to the Bemis United Methodist Church, P.O. Box 9298, 23 N. Massachusetts Ave., St., Bemis, TN 38314 or to Order of Eastern Star, Jackson Chapter #85, %Mrs. Elizabeth Weir, 1700 Campbell St., Jackson, TN 38305. Arrington Funeral Directors 148 W. University Parkway 731-668-1111 www.arringtonfuneralgroup.com

Mary Osalean &#8220;Ossie&#8221; Hensley, 96, died Sunday March 1, 2015 at Regional Hospital of Jackson. She was born July 6, 1918 in Deanburg, TN the daughter of the late Walter Guy Bell and Minnie Estelle Marsh Bell. She was a member of... View Obituary & Service Information

The family of Mary Osalean "Ossie" Hensley created this Life Tributes page to make it easy to share your memories.