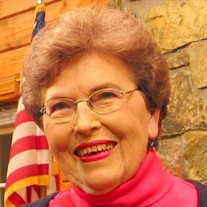 Martha Anne Tankersley, age 84, went to be with her Heavenly Father on Monday, March 18, 2019. She was born and raised in Haywood County, the daughter of the late Joe Patterson and Mattie Wilson Barden. After graduation from Haywood County High School she attended West Tennessee Business College. She married Dexter Coleman Tankersley in 1954 and they raised their family in Jackson. She had a rewarding career in banking and enjoyed her job because of all the people she was able to come in contact with each day, choosing not to retire until 2015. Martha Anne was an active member of West Jackson Baptist Church since 1962, a member of the WMU, the Mary-Martha Cooking group and taught 1st - 3rd grade Sunday school for over 40 years. She served on many committees in the church and was a well-known prayer warrior! The only thing she loved more than her church was her family and she served both selflessly. Most of the time you would find “Mimi” in the kitchen surrounded by her family. She is survived by her husband of 65 years, Dexter, one son, Mike Tankersley (Janet) of Jackson, TN, two daughters, Dianne Spooner (John) of Nashville, TN, Linda Harrington (Robert) of Memphis, TN, seven grandchildren, Rachael Barker (Jacob), Karlie Tankersley, Adam Tankersley, Cameron Spooner, Anna Spooner, Leah Harrington, Meg Harrington along with many nieces, nephews, cousins and dear friends. The family would like to extend their deep appreciation to her caregiving friends and family along with the staff of Brookdale Jackson Oaks, AsceraCare and Gwen’s Quality Care. The family has requested that memorial contributions be directed to West Jackson Baptist Church Children’s Ministry, 580 Oil Well Rd, Jackson, TN 38305. SERVICES: Funeral services will be held Thursday, March 21, 2019 at 2:00PM in the chapel of Arrington Funeral Directors. The family will receive friends prior to the service Thursday from 12:00PM until service time at 2:000PM. Arrington Funeral Directors, 148 W. University Parkway, Jackson, TN 38305.731.668.1111.www.arringtonfuneralgroup.com.

Martha Anne Tankersley, age 84, went to be with her Heavenly Father on Monday, March 18, 2019. She was born and raised in Haywood County, the daughter of the late Joe Patterson and Mattie Wilson Barden. After graduation from Haywood County... View Obituary & Service Information

The family of Martha Anne Tankersley created this Life Tributes page to make it easy to share your memories.

Martha Anne Tankersley, age 84, went to be with her Heavenly...