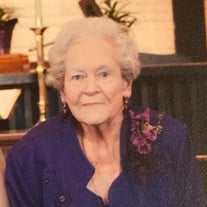 Martha Carol Hampton Gaddie was born on January 17, 1930, in Paris, TN. Her parents were the late Rena Hunt Hampton and Clarence O. Hampton, Sr. She died on Friday, January 1, 2021 at her Jackson residence. Her only brother was Clarence O. Hampton, Jr., who died in 2009. Martha attended Shemwell Kindergarten, Atkins-Porter Elementary, and Grove High School in Paris, TN. She moved to Jackson in 1945 when her mother was employed by Lambuth College. She graduated from Jackson High School in 1948, and Lambuth College in 1951. She later received a master’s degree and forty-five hours from Memphis State. She was a member of Alpha Omicron Pi, Alpha Delta Kappa, a sorority for teachers, and Kappa Delta Pi, an honorary society for graduate school students in education. Martha’s teaching career began in Obion County, TN, where she taught at Dixie and Hornbeak High Schools, as well as Lexington City Schools in Lexington, TN and Grandview Heights Elementary in Memphis. She retired from Raleigh-Egypt in Memphis in 1995. One of the highlights of her teaching career was taking many students on tours of Western Europe. Another was serving on bargaining committees which negotiated contracts for teachers in Memphis City Schools. She served on the Board of Directors for the Memphis Education Association, the Tennessee Education Association, and she was a lifetime member of the National Education Association. Martha was a member of the Methodist Church her entire life. Her parents enrolled her at the First Methodist Church in Paris when she was a baby. She was a member of the United Methodist Women and served as an officer on the local, district, and conference levels. She was a member of Highland Heights United Methodist Church in Memphis where she taught an adult Sunday school class, sang in the choir, and served on the Church Council. When she moved to Bemis, TN in 2008, she joined Bemis United Methodist Church where she served on several committees and the church council. Martha’s survivors are her daughters, Carol Gaddie Barnes (Edward - deceased) of Mayfield, KY and Susan Beth Gaddie of Memphis, TN, her sons, David Hampton Gaddie (Nancy) of Memphis, TN, Michael Keith Gaddie (Michelle) of Lake Forest, CA, and Charles Andrew “Andy” Gaddie (Teresa) of Jackson, TN, her sister-in-law Anne Rooks Hampton of Southlake, TX, her grandchildren, Elizabeth Carol Barnes of Murray KY, Samuel Andrew Gaddie of Aberdeen, SD, Sarah Haynes Gaddie of Memphis, TN, Elizabeth Hampton Gaddie of Memphis, TN, Austin Michael Gaddie of Lake Forest, CA, Clayton David Gaddie of Lake Forest, CA, Nichole Gonzalez (Marc) of San Dimas, CA, Eli McKinley Phipps (Paula) of Columbia, TN, Ehren Ray Phipps (Lindsey) of Hermitage, TN, Brittany Nicole Haynes (Robert) of Jackson, TN, Heather Marie Kee of Chattanooga, TN, and Justin Scott Kee of Jackson, TN. She also had eleven great-grandchildren and several nieces and nephews. SERVICES: A funeral service were held at 1:00 PM Friday, January 9, 2021 at Bemis United Methodist Church, with Rev. Travis Penney officiating. Burial will follow in Maplewood Cemetery in Paris, TN. The services will be lived streamed and can be found at www.facebook.com/bemisumc The family will be received friends from 11:00 AM until 1:00 PM at the church prior to the funeral service. Pallbearers will be Austin Gaddie, Clayton Gaddie, Sam Gaddie, Robert Hampton, Robert Haynes, Justin Kee, Ehren Phipps, Eli Phipps, and Tim Rushing. In lieu of flowers, memorial contributions can be directed to Bemis United Methodist Church, 23 Massachusetts St., Jackson, TN 38301, the Wesley Foundation-MSU, 3625 Midland Ave., Memphis, TN 38111 or any other charitable cause. The family would like to acknowledge and thank the staff and aides of Senior Solutions for their loving care to Mrs. Gaddie. Arrington Funeral Directors, 148 W. University Parkway, 731.668.1111 www.arringtonfuneralgroup.com

Martha Carol Hampton Gaddie was born on January 17, 1930, in Paris, TN. Her parents were the late Rena Hunt Hampton and Clarence O. Hampton, Sr. She died on Friday, January 1, 2021 at her Jackson residence. Her only brother was Clarence O.... View Obituary & Service Information

The family of Martha Carol Hampton Gaddie created this Life Tributes page to make it easy to share your memories.