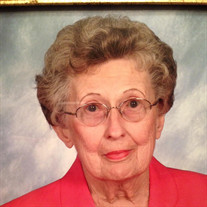 Marie Petty Forsythe, 91, died Sunday morning, May 18, 2014 at her residence under the loving care of Avalon Hospice and her loving family. She was born March 5, 1923 in Henderson County, Tennessee the daughter of the late Henry Jasper... View Obituary & Service Information

The family of Marie Petty Forsythe created this Life Tributes page to make it easy to share your memories.