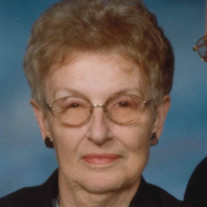 Margaret “Amy” Smith, age 83 died on Sunday, April 9, 2017 at her residence surrounded by her family under the loving care of Hospice of West Tennessee. Amy was born on April 27, 1933, the daughter of the late J.G. and Emmer Mayfield Duke. She was a graduate of Beech Bluff High School, where she was captain of the girls’ basketball team. She was retired as a secretary/bookkeeper with twenty-five years of service with Felsenthal Planning and Service. She was a long-time member of Potts Chapel United Methodist Church where she was a member of the Pastor Parish Committee. She enjoyed sewing, cooking, caning, camping and quilting. She took pride in her garden, raising violets and orchids. She is survived by her husband of sixty-five years, Walter Smith of Jackson, TN; a son, James “Jim” Walter Smith and wife Carla of Cordova, TN; a daughter, Carol Cook and husband Mike of Jackson, TN, grandchildren, Amy Cook of Florida, Melissa Malone of Gatlinburg, Meredeth Miranda and David Tate of LA. And five great grandchildren. She was preceded in death by a brother, Harold Duke and a granddaughter, Erin Webster. SERVICES: A funeral service will be held at 3:00 PM Wednesday, April 12, 2016 in the chapel of Arrington Funeral Directors, with burial to follow at Beech Bluff Cemetery. The family will be receiving friends on Wednesday, April 12, 2017 from 1:00 PM until 3:00 PM prior to the service. The family is requesting that memorial contributions be directed to Hospice of West Tennessee, 1804 Hwy 45 Bypass, Jackson, TN 38305 or to Potts Chapel United Methodist Church, 904 Potts Chapel Road, Jackson, TN 38301. Arrington Funeral Directors, 148 W. University Parkway, 668-1111 www.arringtonfuneralgroup.com

The family of Margaret "Amy" Smith created this Life Tributes page to make it easy to share your memories.