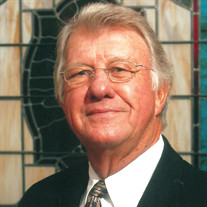 Lynn B. Edmonson, age 84, died on Tuesday, February 12, 2019 at his residence surrounded by his loving family. Lynn was born in Bauxite, AR on December 29, 1934, the son of the late Stewart Dee and Mona Broyles Edmonson. He was a veteran of the United States Air Force and was retired from National Chem Search with over forty years of service. He was a member of First Baptist Church since 1963, where he was active in Brazil Missions, having completed fourteen trips to Brazil and one to Nicaragua. He was responsible for funding the construction of one of the chapels built in Brazil in honor of his children and grandchildren. He was a deacon emeritus having served two terms consecutively as chairman. He was a Sunday school teacher for many years and worked with the College Student Ministry, providing a room in his home for many students during their time in Jackson. He was a supporter of Union University and was honored to have served two consecutive terms on the board of trustees. Lynn was an avid golfer and Arkansas Razorback fan, who enjoyed working in his yard and flower gardening. He is survived by his wife of sixty years, Pat Udey Edmonson of Jackson, TN; two daughters, Dana Wallace and husband Jeff of Seymour, TN and Laura Weatherford and husband Jim of Jackson, TN; five grandchildren, Tyler Weatherford of Nashville, TN, Ellison and Zach Weatherford of Jackson, TN, Tanner Wallace and wife Elizabeth and Trevor Wallace of Seymour, TN. SERVICES: A funeral service will be held at 1:00 PM on Friday, February 15, 2019 at First Baptist Church of Jackson with Dr. Justin Wainscott officiating. Burial will follow in Ridgecrest Cemetery. Pallbearers will be Tyler, Zach and Ellison Weatherford, Tanner and Trevor Wallace and Michael Kelly. Honorary pallbearers will be the deacons of First Baptist Church. The family will be receiving friends on Friday, February 15, 2019 from 11:00 AM until 1:00 PM prior to the service at First Baptist Church. The family is requesting that memorial donations be directed to First Baptist Church c/o Brazil Mission Fund, 1627 N. Highland Ave. Jackson, TN 38301.

Lynn B. Edmonson, age 84, died on Tuesday, February 12, 2019 at his residence surrounded by his loving family. Lynn was born in Bauxite, AR on December 29, 1934, the son of the late Stewart Dee and Mona Broyles Edmonson. He was a veteran of... View Obituary & Service Information

The family of Lynn B. Edmonson created this Life Tributes page to make it easy to share your memories.