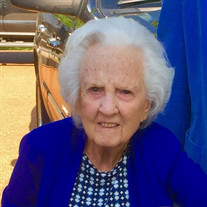 Louise Smith Sparrow, age 96, died on Tuesday, February 19, 2019 at her Jackson, TN residence. She was born in McNairy County, TN on April 28, 1922, the daughter of the late Joseph Lloyd and Ollie Mae Weaver Smith. She was married to Milton Fillmore Sparrow who preceded her in death in 1992. She was a graduate of Bethel College in McKenzie, TN. Louise was an Accountant, who along with her late husband owned and operated Sparrow and Sparrow in Jackson, MS. since the late 1940’s. She was an active member of the Broadmeadow United Methodist Church in Jackson, MS. She was also a member of the Opera Guild, the Junior League and the ladies auxiliary of the Civitan club and was a member of the Order of the Eastern Star. She was very active in volunteering with the Children’s hospital and the Willard F. Bond Hospital. She is survived by her two sons, Dr. John Sparrow of Jackson, TN and James Milton Sparrow of Jackson, MS; a grandson, John Gregory Sparrow II of Jackson, TN and a brother, Charles Richard Smith of Jackson, TN. She was preceded in death by her siblings, Harold Franklin Smith, James L. Smith and Bonnie Lee Gilbert Middleton. SERVICES: The family will be receiving friends in Jackson, TN on Friday, February 22, 2019 from 4:00 PM until 7:00 PM at Arrington Funeral Directors and on Saturday, February 23, 2019 from 1:00 PM until 2:00 PM at Lakewood Funeral Home in Jackson, MS with a graveside to follow at 2:00 PM in Lakewood Cemetery in Jackson, MS. Pallbearers will be David Aherrera, Dr. Conrado Sioson, Patrick Montecillo, Allen Miller, Miquel Sioson and Dustin Montecille. Honorary pallbearers will be Rusty Gilbert, Gary Franklin, Chuck Smith, Pam Gilbert, James Smith, Brandon King, Patrick Aherrera, Hannah Aherrera, Nicole Sioson, Phyllis Wilkinson, Isabella Montecillo, Lance Miller and Clarissa Miller. The family is requesting that memorial contributions be directed to the American Cancer Society or the American Heart Association.

Louise Smith Sparrow, age 96, died on Tuesday, February 19, 2019 at her Jackson, TN residence. She was born in McNairy County, TN on April 28, 1922, the daughter of the late Joseph Lloyd and Ollie Mae Weaver Smith. She was married to Milton... View Obituary & Service Information

The family of Louise Smith Sparrow created this Life Tributes page to make it easy to share your memories.