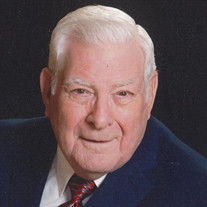 Lester Harold James, age 87, passed away peacefully on Friday, January 28, 2022, at Jackson-Madison County General Hospital after a short illness. Harold was born on September 30, 1934, the oldest son of the late Lester Stanton James and the late Doris Strong James. He was born at their home in Eads, Tennessee which dates back to Civil War times and was referred to as “Houston Hill Farm.” Harold attended Cordova Elementary School, Germantown High School and graduated from Collierville High School in 1952. He attended the University of Tennessee – Martin Branch for one year before volunteering to join the U.S. Army and was honorably discharged in 1963. He married JoAnn Warmath in 1955. He returned to UTM, graduating in 1959 with a Bachelor of Science in Agriculture. He and his wife had two children, Mike and Jan, and were married until JoAnn’s passing in 2016. Harold was engaged in several businesses during his career, and ultimately retired as a home building contractor. As a child, he was a member of Bethany Christian Church in Eads, Tennessee. As an adult, he was a long-time and faithful member of Dyersburg (Tennessee) First United Methodist Church from 1963 until 2017. He then moved to Jackson, Tennessee and became an affiliate member of Aldersgate United Methodist Church. Harold generously gave his time and talents to his church and many organizations throughout his life. He served for many years on the church administrative council and the Lifeline Blood Center board of directors. He was an 8 ½ gallon blood donor. Harold was a volunteer leader of the Dyersburg High School Band Boosters and the West Tennessee Boy Scouts Council. He also gave his time as a transport volunteer at the Dyersburg Hospital, delivered Meals on Wheels, took communion to homebound members of his church and was a life-long supporter of Reelfoot Rural Ministries. He was a long-time member of Rotary Clubs in Dyersburg and in Jackson. He was recognized as a Paul Harris Fellow for his work on behalf of The Rotary Foundation. Harold’s giving spirit was an inspiration to all who knew him. And, “everybody” knew him because he never met a stranger. In addition to his parents and his wife, he was preceded in death by two brothers, Jesse Joseph James and Milton Francis James. He is survived by his son, Mike James (Stephanie) of Germantown TN and daughter, Jan Matthews (Barry) of Jackson TN; two granddaughters, Laura Adams (John) of Lebanon TN and Amy Lawrence (Logan) of Jackson TN; and four great-grandsons, Levi, Matt, Jack and Reid. To those four boys, he was their beloved “Pop Pop.” SERVICES: A Celebration of Life service will be held at Aldersgate United Methodist Church in Jackson at 11:00 AM on Monday, January 31, 2022, followed by a 3:00 PM graveside service and burial at Bethany Christian Church Cemetery in Eads, Tennessee. Dr Barry Scott will be officiating. There will not be any visitation prior to the service. Pallbearers serving will be John Adams, Logan Lawrence, Jim Jones, John Archer, Jr, Cody Gobbell, Brad Latham and Mark James. The family is requesting that memorial contributions be directed to: Dyersburg United Methodist Church, 100 McGaughey Street, Dyersburg, TN 38024 or fumcdyersburg.com; Aldersgate United Methodist Church, 1050 N. Parkway, Jackson, TN 38301 or aldersgatejackson.com; St. Jude Children’s Research Hospital, PO Box 1000, Dept. 142, Memphis, TN 38148 or stjude.org; or Reelfoot Rural Ministries, 6923 Minnick Elbridge Road, Obion, TN 38240 or reelfootruralministries.org Arrington Funeral Directors 148 W, University Parkway Jackson, TN 38305 731.668.1111 www.arringtonfuneralgroup.com Memorial contributions can be made here: https://joingenerous.com/arrington-memorial-lester-harold-james-p7jd0pn

Lester Harold James, age 87, passed away peacefully on Friday, January 28, 2022, at Jackson-Madison County General Hospital after a short illness. Harold was born on September 30, 1934, the oldest son of the late Lester Stanton James and the... View Obituary & Service Information

The family of Lester Harold James created this Life Tributes page to make it easy to share your memories.