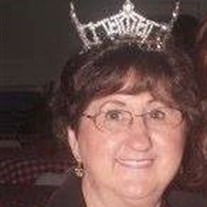 Funeral services will be held for Laura Elizabeth Pope (Mama E) at 11:00 Monday April 14th, 2014 in the chapel of Arrington Funeral Directors with Jerry Patterson and Drew Crosby presiding. Mrs. Pope died. Friday, April 11th 2014, at her home. Mrs. Pope was born in Britton Lane, TN on August 24th, 1933. She was raised in Jackson, TN, and upon marrying Gilbert B. Pope on December 10th, 1948, they made their home in Jackson where they raised 4 children, Laura Diane Rushing, Martha Lynn Rice, Michael Gilbert Pope, and Darrell Thomas Pope. She was a loving wife, mother, grandmother, and great grandmother. She got much pleasure cooking wonderful meals for her whole family and any company that came for a visit. She was not happy unless the whole counter top was full of food, and having seconds was always mandatory. She was a member of the Church of Church. Through the years she enjoyed worshiping with the Bemis, East Chester, Allen and Edgewood (later North Jackson), Campbell Street, and Madison County congregations. She was at home with her Christian family wherever she was currently worshiping. Her true talent was in her sewing. She was a wonderful seamstress who worked for several companies over the years, but she finally ended up running her business out of her home. Her sewing room is lined with photos of happy customers wearing the many dresses she altered over the years. Her pride and joy was the 27 years she spent working as the seamstress for the Miss Tennessee Pageant where she was also on the Board of Directors. Mama E was preceded in death by her grandson, Jacob Thomas Pope. She.is survived by her husband, Gilbert Brevard Pope, her children, Laura Diane Rushing (Junior) of Medon, Martha Lynn Rice (Tony) of Jackson, Michael Gilbert Pope (Cheryl) of Franklin, and Darrell Thomas Pope (Candy) of Jackson; eight grandchildren, April Lynn Richey (Tom), Melanie Crosby (Drew), Jeff Rice, Christie Hunter (Jesse), Tiffani Pope, Jamie Rushing, Gabrielle Pride (Jacob), and Taylor Phillips (Andrew); nine great-grandchildren, Jaden Hunter, Chloe Hunter, Nova Rice, Reggi Rushing, Ella Ausbrooks, Corbin Crosby, Lydia Rice, Mia Phillips, and Darcy Rice. She also has two more great grandkids on the way. She was the youngest of ten children of which she is survived by Maudie Huey. She also leaves behind many nieces and nephews and their families. Our beloved “Mama E” will be missed by her whole family. Pallbearers to serve are Jeff Rice, Jamie Rushing, Tom Richey, Jesse Hunter, Drew Crosby, and Andrew Phillips. Honorary pallbearer is Jacob Pride. The family will receive friends and relatives from 2 to 5 pm Sunday at the funeral home. Burial will take place at. Ridgecrest Cemetery in Jackson following the funeral.

The family of Laura Elizabeth Pope created this Life Tributes page to make it easy to share your memories.

Funeral services will be held for Laura Elizabeth Pope (Mama...