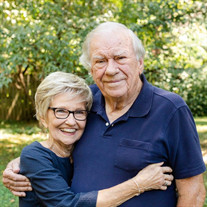 Larry Joe Strange was born March 23, 1938, to James Freddie and Nettie V Strange in Crockett Mills, Tennessee. His education started out on shaky ground as he cried most every day for the first two years, being homesick for home. He grew up in Crockett Mills, graduating from Hamlett-Robertson High School in 1956. He went on to UT Martin, which he referred to as “The Harvard of the South” graduating in 1960 with a Bachelor of Science in Agriculture. Upon graduation, he took a job with the Soil Conservation Service and moved to Lebanon, Tennessee. He met and married the love of his life there – Julia Ann Smith. They were married on August 20, 1961. Larry worked for several years for Armour Fertilizer. He and Julia began their life together in Bowling Green, Kentucky, where their first daughter, Amy was born. After moving to Memphis for two years, they moved to Nashville, Tennessee, where daughters Eve and Holly were born. Larry began working for Farm Bureau Insurance while the family lived in Nashville. In 1972, Larry accepted an offer with the Tipton County Farm Bureau, and the Strange family relocated to Covington, Tennessee. Larry would serve the citizens of Tipton County for 25 years until his retirement in 1997. Larry and Julia retired and moved to Jackson, Tennessee. Larry leaves behind his wife of 59 ½ years, Julia Smith Strange; daughters Amy (Steve) Warren of Searcy, Arkansas; Eve (Dave) Clouse of Jackson, Tennessee, Holly (Scott) Knowlton of Memphis, Tennessee, and brother Freddie Neal (Ann) Strange of Cordova, Tennessee. He also leaves 11 favorite grandchildren and 1 favorite great-grandchild, and they were his pride and joy. His 11 favorite grandchildren are Nathan and Brooke Warren, Carson Warren, Carly Warren, Jackson and Kayla Clouse, Eden Clouse, Conley and Chad Brown, James Knowlton and Julia Knowlton. Last, but not least, is his favorite great-granddaughter Blayke Leigh Clouse. A memorial service was held at Campbell Street Church of Christ on Sunday, February 28, 2021.

Larry Joe Strange was born March 23, 1938, to James Freddie and Nettie V Strange in Crockett Mills, Tennessee. His education started out on shaky ground as he cried most every day for the first two years, being homesick for home. He grew... View Obituary & Service Information

The family of Larry Joe Strange created this Life Tributes page to make it easy to share your memories.