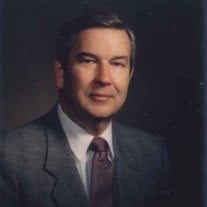 Mr. Larry Casey, age 79 of Jackson has succumbed to lung cancer after a seven year battle. Funeral services will be held at 1:00 PM Saturday, March 2, 2013 in the chapel of Arrington Funeral Directors. A private committal service will be held at Ridgecrest Cemetery with Rev. Nick Pappas officiating the services. The family will be receiving friends on Friday, March 1, 2013 from 5:00 PM until 8:00 PM at Arrington Funeral Directors. Mr. Casey was born on the Browns Church Road in Madison County, the family moved to Pinson when he was at the age of 3 years old, where he grew up there. He graduated from Pinson High School in the class of 1951. He attended West Tennessee Business College. He worked at three or four different jobs before settling down with Townsend Electrical Company for 10 years. In 1968 Mr. Casey started his own electrical contracting firm in Henderson, TN and moved his company to Jackson in 1975. Mr. Casey grew Casey Electrical Company to be one of the largest electrical companies in the United States, being in the top 100 for several years before selling the company in 1997 to Comfort Systems out of Houston, Texas. He worked across 23 states mostly in industrial, including steel mills, auto distribution centers, printing companies and covering all types of industrial jobs. His work mostly consisted of design build jobs. This is the most popular way the industrial industry does their plants. In 1988 Mr. Casey purchased the Truex Chevrolet in Jackson, along with the Chevrolet Jeep dealership and grew the dealership to be the largest in West Tennessee, outside of Memphis. In 1994 they were approached by Serra out of Michigan about purchasing the dealership, so he sold the dealership and remained the property owner, with a lease to Serra, after Serra moved at the end of their 5 year lease, the property was then leased to Madison County School Garage and until the property was sold to the City of Jackson. During his professional career he served on many board of directors throughout the state. While living in Henderson he served on the board of Chester County Bank. Before moving to Jackson in 1968 he served on the board for the Tennessee Builders and Contractors, Woodland Hills Country Club, serving 2 years as president, served two 3 year terms at the Jackson Country Club, served on the board of Jackson Chamber of Commerce. Throughout his life Larry always enjoyed his faith, family and golf. His love for the game of golf has led him to play all over the world from New Zealand, Australia, Europe, Scotland, Ireland, the Caribbean’s and throughout the United States. He was a member of three clubs in Scotland, where he traveled to for several years to play golf, The Royal Dornoch, Loch Lomond and Narin Golf Clubs. He was invited to join the Duke of Edinburgh Golf Society which was composed of 100 members known as “The Duke 100”. Larry was one of three members from the United States that belonged to this club. They had several events that were held throughout England, Scotland and Europe. One of the trips was to Spain where they played Valderrama Golf Club. This is the club that the 1997 Ryder Cup was played where Seve Ballesteros was captain of the European team. Larry said this is the best club that he ever played throughout all his golfing. His number two would be Cypress Point and number three would be Royal Dornoch in Dornoch Scotland. Prince Edward represented the royal family for the Duke of Edinburgh Golf Society and traveled with us on several trips, including the trip to Spain, where the royal family of Spain had a dinner for Prince Edward and the Duke of Edinburgh Golf Society. This would be the highlight of all his golfing trips After his retirement he started spending the winter months in Scottsdale, Arizona, where he belonged to Desert Highlands, Estancia Country Club and Whisper Rock Golf Club. Mr. Casey has been a member of the Jackson County Club since 1975. Mr. Casey has requested that his coffee group Dr. Charles Ames, Dr. Ruffin Craig, Joe Richardson, Edward “Pepper” Martin, Jerry Ellis, Harold “Butch” Cashon, Gerald Hutcherson and Judge David Farmer to sit together as Honorary pallbearers. Mr. Casey would like to give much thanks and gratitude to Mayo Clinic and Hospital in Scottsdale, Arizona for their superior care and treatment. He is preceded in death by his parents, John Thomas and Fannie Catherine (Crowe) Casey, a son, Mark Keith Casey and seven brothers and sisters. He is survived by his wife Roxanne Casey and three children, Stanley Alan Casey of Jackson, Lawrence Scott Casey of Jackson, and Leanne (Bill) Richardson of Jackson and six grandchildren and one great grandchild and his brother Billy Gene (Marion) Casey of Huntsville, AL and several nieces and nephews. The family is requesting memorial contributions be made in lieu of flowers to Youth Town of Tennessee, P.O. Box 1385 Jackson, TN 38302-1385 and St. Jude Children’s Research Hospital, 501 St. Jude Place, Memphis, TN 38105. Arrington Funeral Directors 148 W. University Parkway 731/668-1111 www.arringtonfuneralgroup.com

Mr. Larry Casey, age 79 of Jackson has succumbed to lung cancer after a seven year battle. Funeral services will be held at 1:00 PM Saturday, March 2, 2013 in the chapel of Arrington Funeral Directors. A private committal service will be held... View Obituary & Service Information

The family of Mr. Larry Casey created this Life Tributes page to make it easy to share your memories.