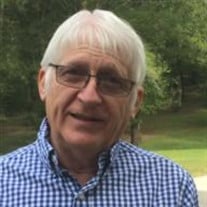 Kenneth Neil Holt, age 67, of Jackson, TN entered his eternal reward on February 5, 2019 surrounded by his wife and children at Alive Hospice Facility in Murfreesboro, TN after a long battle with cancer. Kenny was the only son born to the late William Hays Holt and late Myrtle Louise Crawford Holt on September 21, 1951. He was raised in Buchanan, Tennessee where he spent many hours working on the family farm. He loved playing baseball and basketball, and was a member of the community saddle club, where he excelled at barrel racing. He graduated in 1969 from Buchanan High School as the class Valedictorian. After graduating, he went to Freed Hardeman College. During his time there, he met a girl from Jackson, Wanda Faye Wyatt. They fell in love and were married on January 28, 1972. During their 47 years of marriage, Kenny and Wanda lived in Jackson, where he worked as Maintenance Manager for Citiplate for 33 years. He loves baseball and coached in the Madison County Baseball League. He also served as Youth Deacon and Elder at Campbell Street Church of Christ. Kenny was known for studying the bible and his love for the Lord. That love led him to serve as part-time preacher at his childhood congregation, Bethlehem Church of Christ in Buchanan. Kenny loved spending time with his children and grandchildren. He especially enjoyed watching them play sports and attending all their extra-curricular activities. Many hours were spent with his family and friends listening and watching St. Louis Cardinals baseball and Tennessee Volunteers football. He cherished vacations, birthdays, and holidays with his entire family and special friends. The annual mission trip to The City of Children in Ensenada, Mexico was always one of the highlights of his year. He is survived by his wife of 47 years, Wanda Holt, his four children, Heather Freeman (Casey), Zachary Holt (Rachel), Holly Sloan (Pete), Haley Bunney (D.J.) and 14 grandchildren; Addison Frazier and Connor Freeman, Hunter and Hudson Holt, Carson, Gage, Brant, Makenzie, Leigha, Erin, Madeline, and Grace Sloan, and Brookelynn and Lillian Bunney, three sisters, Marty Olive (Jerry), Reba Couch (Jerry), Betty Kay Dick (late Michael), step-mother, Marian Holt, mother-in-law, Odaleane Wyatt, sister-in-law, Teresa Dean (Alan), brother-in-laws, Mark Wyatt (Joanne) and Shawn Wyatt (Sherri) and a host of nieces and nephews. Services to celebrate Kenny’s life will be held at Campbell Street Church of Christ. The family will receive friends from 5:00-8:00 p.m. on Friday, February 8, 2019 and Saturday, February 9, 2019 at noon with the celebration service at 2:30 p.m. In lieu of flowers we request donations be sent to The American Cancer Society or Campbell St. Church of Christ, Memo: The City of Children.

Kenneth Neil Holt, age 67, of Jackson, TN entered his eternal reward on February 5, 2019 surrounded by his wife and children at Alive Hospice Facility in Murfreesboro, TN after a long battle with cancer. Kenny was the only son born to the late... View Obituary & Service Information

The family of Kenneth Neil Holt created this Life Tributes page to make it easy to share your memories.