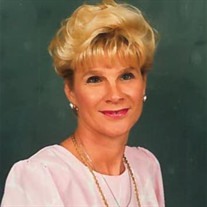 Karen Lynn Cook King died Tuesday, April 30, 2019 at her residence after a long illness. She was born to the parents of Frank and Rose Cook in Circleville, Ohio. She was retired as a secretary for Duncan Office Supplies and loved art and crafts, especially making Christmas Decorations, enjoyed drawing, loved animals especially cats, and loved her family deeply. She was the third of four children and moved to Macon, GA when she was only six years old where she grew up, attended school and later met her husband Bill. She is survived by her husband, William H. King of 51 years, two daughters, Tracy Lynn Hayes and Dawn Renee’ King, a son in law, Tracy Reed Hayes and two Granddaughters, Kyndal King and Chynna Reed Hayes, one brother, Howard Cook, two sisters, Myrna Hyder and Ladene Riggs. The Celebration of the life of Karen Lynn Cook King began on Oct. 17, 1944 and in this celebration of her beautiful life, some moments of that life and brief timeline are shared to commemorate her. Karen was born in Ohio but her family moved to Macon, GA when she was only six years old where she grew up, attended school and later met her husband Bill in the state GA too. Funny enough she never considered herself truly southern and often corrected her children’s southern slang. From the prospective of her mother & siblings, she was unique in several ways. She was a daddy’s girl and she honored and adored her father deeply. She regularly attended church & had typical all American upbringing. She graduated H.S. from Lanier-an all-girls school in Macon, GA in 1962 and received a scholarship to college from her Methodist church. However, her plans changed and she moved to Atlanta where she worked for the city. She meet a young handsome man, fell in love and after only a few months of dating on July 1, 1967, Bill King and Karen Cook were married and would be celebrating their 52 nd Wedding Anniversary this year. Karen often spoke of what a good man Bill is even in her last days. Karen gave birth to Tracy Lynn in 1968 and in 1970 to Dawn Renee’. Later in life, Karen would often remarked that raising her little ones was the happiest days of her life! During those early days of motherhood, she stayed at home and sold Avon door to door in her neighborhood in Duluth, GA. Later going to work as an Executive Secretary at Major Corporation. As a mother, she was very strict and was determined not to let her girls grow up too fast. She could be very caring and fun loving. The neighborhood kids always loved her. She would fix their cuts and always blowing the medicine sting away, giving out cookies and juice and listen to their problems. She gave sound advice such as manners and respecting others. Karen went out of her way to make Christmas very special. One of her greatest talents was her artistic abilities. She made the most beautiful, regal and elegant hand beaded tree decorations you have ever seen. Karen always could draw without any formal art education. Karen loved and adored her grandchildren. The night of her first grandchild was born she stayed and walked with her daughter & providing advice until the husband got home and later that night on April 14, 1995, she became a grandmother. She came back to stay with Tracy and help in every way with her new grand baby. She did the same for Chynna Hayes also. Eventually Bill and Karen moved to Jackson, TN to be closer to those girls. She was the type of grandmother that read to the girls, taught them manners, gave bubble baths, fix them special meals and made them feel very special. She was a huge animal lover and adored her pets especially the cats. Karen was a fierce protector of her daughter Renee. Their bond was special. Renee and Bill are heroes for the love and care they gave her daily over many years as her mind and abilities slipped further away from her grip. Karen was a beautiful, artistic, talented and elegant woman, a daughter, wife, mother and grandmother that is now in the arms of her loving father. Reading from 1 Peter 1:3-4. Praise be to the God and Father of our Lord Jesus Christ! In his great mercy, he has given us new birth into a living hope through the resurrection of Jesus Christ from the dead, and into an inheritance that can never perish, spoil or fade. Memorial Contributions can be made to the Hope Hill Cemetery Fund, 52 Hope Hill Road, Milan, TN 38358 c/o Parrish Turner or Gibson County Animal Shelter, P.O. Box 126 Trenton, TN 38382. SERVICES: The family will be receiving friends on Thursday, May 2, 2019 from 5:00 to 7:00 p.m. at Arrington Funeral Directors. A Funeral Service will be Friday, May 3, 2019 at 12:00 P.M. at Arrington Funeral Directors with Pastor Mike Prestininzi officiating. Burial will follow in Hope Hill Cemetery in Milan. Arrington Funeral Directors, 148 W. University Parkway, 731-668-1111 www.arringtonfuneralgroup.com

Karen Lynn Cook King died Tuesday, April 30, 2019 at her residence after a long illness. She was born to the parents of Frank and Rose Cook in Circleville, Ohio. She was retired as a secretary for Duncan Office Supplies and loved art and crafts, especially... View Obituary & Service Information

The family of Karen Lynn Cook King created this Life Tributes page to make it easy to share your memories.