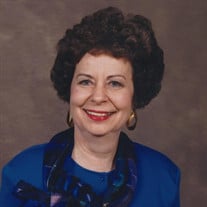 Joyce Lynn Barefoot, the daughter of the late Colbert and Thelma Wallace Camp, died January 23, 2021 at Maplewood Nursing Home in Jackson, Tennessee. She was born on November 17, 1927 in Monroe, Louisiana. She lived a beautiful life for 93 years and was married to Dr. Hyran Barefoot for 71 years. Other than her husband, she is survived by her three daughters; Judith Lynn (Steve) Thomas of Jackson, Tennessee, Rebecca June (Clayton) Dark of Germantown, Tennessee and Andrea Jane (Nathan) Hunter of Knoxville, Tennessee; grandchildren Abby (Chris) Scott, Anna (Justin) Wainscott, Amanda (Ben) Price, Rebecca (Quinton) Stine, Stuart (Jacquelyn) Hunter and Spence (Meredith) Hunter; 16 great-grandchildren; and sister, Anna Rose Griffis. Joyce graduated from Ouachita Parish High School in Monroe, Louisiana and continued her education at Louisiana Tech University. In 1948, she earned her degree in elementary education and immediately began teaching in the Ouachita Parish Schools. She met and married Hyran Barefoot, the pastor of her church, Liberty Baptist Church, in Calhoun, Louisiana on Thanksgiving Day November 24, 1949. She then joined her husband as a student at New Orleans Baptist Theological Seminary where she earned a master’s degree in religious education. During her studies from 1949 – 1955, she gave birth to her daughters, Judy, June and Jane. The Barefoots joined West Jackson Baptist Church when they first moved to Jackson in 1957 and Joyce became a leader in different phases of the church during her span of more than 50 years. At various times she served faithfully in the following capacities: Church Clerk for 39 years, children’s Sunday School teacher for 65 years, church Greeter for 15 years, two Pastor Selection Committees, member of the Rebuilding Committee for the new church and as chair of the Christmas Decorating Committee for many years. Joyce’s chosen life’s work, for which she was ably educated, was in elementary education. She taught two years in Louisville, Kentucky, one year in Albuquerque, New Mexico, one year in Monroe, Louisiana and taught kindergarten in the Jackson-Madison County’s school system for 30 years. She also started the kindergarten program at First Baptist Church in Jackson. She was a member of Alpha Delta Kappa Education Sorority. In addition to teaching, she was a hospital volunteer 25 years at the former Regional Hospital in Jackson. After retiring in 1985, Joyce continued her teaching and leadership roles at West Jackson Baptist Church. She was a loyal supporter and helper of her husband who was President at Union University and was a member of Union’s Women’s Auxiliary Association. She enjoyed spending time with her six grandchildren and 16 great-grandchildren. She and Hyran were privileged after his retirement to enjoy a summer home in Canada and traveled throughout much of the United States, England and European countries, as well as Israel and Brazil. After her failing health she entered assisted living and nursing homes for the past 4 years. SERVICES: Mrs. Barefoot will lie in state Saturday, January 30, 2021 from 12:00PM until 1:00PM at West Jackson Baptist Church. Family will not be present during this time. Funeral Service will begin at 1:00PM with Rev. Andy Neeley, Rev. Lonnie Sanders and Rev. Ron Hale officiating. Social Distancing and masks are required. There will be a private family burial at Highland Memorial Gardens with Dr. Justin Wainscott officiating. Her grandsons will serve as pallbearers. Service will be streamed live via Youtube on West Jackson Baptist Church's channel. In lieu of flowers, the family requests memorials be directed to the Hyran and Joyce Barefoot Scholarship Fund at Union University, 1050 Union University Drive, Jackson, Tennessee 38305 or to West Jackson Baptist Church, 580 Oil Well Road, Jackson, Tennessee 38305. She was “A good and godly wife and mother” Proverbs 31. Arrington Funeral Directors 148 W. University Parkway Jackson, TN 38305 www.arringtonfuneralgroup.com |

Joyce Lynn Barefoot, the daughter of the late Colbert and Thelma Wallace Camp, died January 23, 2021 at Maplewood Nursing Home in Jackson, Tennessee. She was born on November 17, 1927 in Monroe, Louisiana. She lived a beautiful life... View Obituary & Service Information

The family of Joyce Lynn Barefoot created this Life Tributes page to make it easy to share your memories.

Joyce Lynn Barefoot, the daughter of the late Colbert and Thelma...