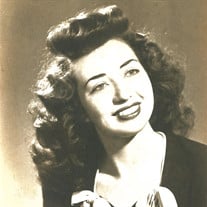 Josephine Williams Rushing entered her eternal home on November 3, 2019. A graveside service will be held at 3:00 PM Wednesday at Rushing Cemetery, with Dr. David Comperry officiating. The family will be receiving friends from 12:00 PM until 2:00 PM at Arrington Funeral Directors prior to the service. Josephine was born in Webster County, Mississippi on September 24, 1926, to James Andy Williams and May Williams. She married James Errol Rushing on August 7, 1948. Errol preceded her in death in 1996. They are survived by two children, Joel Rushing and his wife Diane and Andy Rushing and his wife Susan and their families: four granddaughters, Amy McDowell (Shawn), Lori Farrow (Judson), Jenny Mills (David) and Kelly Rushing; two step grandchildren, Jake Warren (Danielle) and Leah Gilliam (Justin); and 7 great grandchildren, Noah Stanfill, Kylin Carmack, Jack McDowell, Kate Farrow, Harper Warren, Holden Mills and Eden Warren. She graduated from Jackson High School and was employed as an assistant secretary at Northside High School and as a secretary with the Central Office of the Jackson Madison County School System. She was a member of Northside United Methodist Church since 1959. During her retirement years, she had many friends at the Jackson Meadows and at Regency Retirement Village. Josephine has had many caregivers over the last couple of years. The family would like to say a special thanks to the staff of Caris Healthcare Hospice and the Regency Retirement Village and Dr. John Jenkins. Donations may be directed to Northside United Methodist Church, 2571 N. Highland Ave., Jackson, TN 38305. Arrington Funeral Directors, 148 W. University Parkway 668.1111 www.arringtonfuneralgroup.com

Josephine Williams Rushing entered her eternal home on November 3, 2019. A graveside service will be held at 3:00 PM Wednesday at Rushing Cemetery, with Dr. David Comperry officiating. The family will be receiving friends from 12:00 PM until... View Obituary & Service Information

The family of Josephine Williams Rushing created this Life Tributes page to make it easy to share your memories.