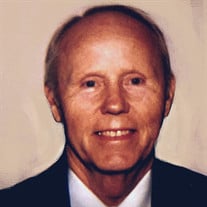 Joseph Daniel Garrett, Sr. 92, formerly of Clarksville, TN awoke in the presence of his Lord and Savior Jesus Christ on October 23, 2021. He bravely endured a diagnosis of Parkinson’s Disease, yet in keeping with his character, carried on, staying active and involved with his church, family and friends. God blessed Joseph with 68 years of marriage to his high school sweetheart, Betty Jo, who survives him. Surviving also are his son, Jody Garrett and daughter-in-law Cathy, daughter, Nancy Carolyn and son-in-law Mark Long, daughter, Emily and son-in-law, Greg York. Joseph was most proud of his nine grandchildren, Katie Little (Cale), Becky Jaszczak (Jacob), Daniel Long, Danny Garrett (Hannah), Garrett York (McCauley), Luke Long (Ashley), Shelby York, Courtney Long, and Joseph York. They will miss their Papa and will especially treasure the memories of Boys-Girl’s week when the cousins would gather at Nana and Papa’s for a week of fun and adventure. Joseph was born in Hendersonville, TN and was preceded in death by his father, Amos T. Garrett, his mother, Annie Stinson Carey and brothers, Sam Garrett and Bob Garrett. Joseph proudly served his country in the Navy from 1947-1951. After serving during part of the Korean War, he returned home to work and continue his education. Joseph was a graduate of MTSU with a degree in engineering. He worked for the telephone company for 39 years. He began as a lineman prior to earning his degree and then worked for “Ma Bell” and finally AT&T. Beyond his career as an engineer for the phone company, Joseph was involved in his community. He served as a scout master for the Boy Scouts for many years and was an active member of his church. He took part in the Gideon ministry, sang in the choir, served as a deacon and took great joy participating in several different mission trips overseas. He loved helping build churches and working in the orphanages sharing the Good News of God’s love with those he came in contact with. Joseph had many interests and talents and was a skilled craftsman. He was well known for reconstructing an original turn of the century cabin in his backyard. He and Betty Jo loved antiquing and enjoyed many excursions hunting authentic treasures for the cabin. Joseph was fondly known by many as Kris Kringle. For over 40 years Joseph handcrafted and painted Christmas ornaments. He painted well over 100,000 ornaments—many of which have been sent worldwide. Joseph touched the lives of many, and the legacy he leaves behind will be cherished by all who knew and loved him. Rejoice with our family because we know that one day, we will join him to live eternally with the Father through our faith in Jesus Christ. The family requests that, in lieu of flowers, a memorial donation be made to First Baptist Clarksville, 435 Madison Street, Clarksville, TN 37040. SERVICES: A Graveside Service will be held on Wednesday, October 27, 2021 at 1:30 P.M. at Tennessee State Veterans Cemetery at Parkers Crossroads with full Military Honors with Rev. Mark Long officiating. Arrington Funeral Directors, 148 W. University Parkway, Jackson, TN 38305 https://www.arringtonfuneralgroup.com

Joseph Daniel Garrett, Sr. 92, formerly of Clarksville, TN awoke in the presence of his Lord and Savior Jesus Christ on October 23, 2021. He bravely endured a diagnosis of Parkinson&#8217;s Disease, yet in keeping with his character, carried... View Obituary & Service Information

The family of Joseph Daniel Garrett created this Life Tributes page to make it easy to share your memories.