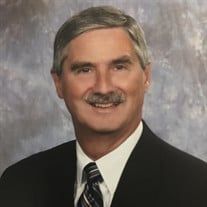 John E. Yarbrough, age 69, peacefully passed from this earthly life to his heavenly home on June 11, 2020 at his Jackson residence. John was born in Jackson, TN on October 2, 1950, the son of the late Herron and Lurlyne Meeks Yarbrough. John’s passion was his career and those that he was associated with as Director of Physical Medicine and Rehab at Jackson Madison County General Hospital, having been honored in 2006 with the West Tennessee Healthcare President’s Award. He was named Alumnus of the year of Lambuth College in both 1995 and 2014 and served on the Board of Directors for University of Memphis – Lambuth for 3 years. He was President of the Tennessee Physical Therapy Association for several years and was given the TPTA Outstanding Service Award in 2001. He was also presented the TPTA Hall of Fame Award in 2013. He was a member of First United Methodist Church, where he served on numerous committees and boards and was currently Co-President of the Family Life Forum Sunday school class. John is survived by his wife, Carolyn Brown Yarbrough of Jackson, TN; his son, Patrick Yarbrough and wife Holly of Memphis, TN; his daughter, Julie Terrell and husband Don of Hernando, MS; his brothers, Joe Yarbrough, Glenn Yarbrough and Harrison Yarbrough of Jackson, TN and five grandchildren, Bailey Terrell, Noel Terrell, Jake Yarbrough, Seth Yarbrough and Maddox Yarbrough. SERVICES: A funeral service will be held at 1:00 PM Monday, June 15, 2020 in the chapel of Arrington Funeral Directors with Dr. David Comperry, Dr. Sky McCracken, Dr. Eddie Bromley and Mr. Dave Bratcher officiating. Burial will follow in Hollywood Cemetery. With social distancing practices in place, the family will be receiving friends on Monday, June 15, 2020 from 11:00 AM until 1:00 PM prior to the service at Arrington Funeral Directors. Pallbearers for the service will be Bryan Thorne, Herron Yarbrough, Bill Yarbrough, Bob Sadowski, Ralph Hickman and Brian Dougan. The family is requesting that memorial contributions be directed to the University of Memphis - Lambuth c/o the John Edwin Yarbrough Scholarship,705 Lambuth Blvd, Jackson, TN 38301 or First United Methodist Church 200 S. Church Street, Jackson, TN 38301. Arrington Funeral Directors, 148 W. University Parkway, 668.1111 www.arringtonfuneralgroup.com

John E. Yarbrough, age 69, peacefully passed from this earthly life to his heavenly home on June 11, 2020 at his Jackson residence. John was born in Jackson, TN on October 2, 1950, the son of the late Herron and Lurlyne Meeks Yarbrough. John&#8217;s... View Obituary & Service Information

The family of John E. Yarbrough created this Life Tributes page to make it easy to share your memories.