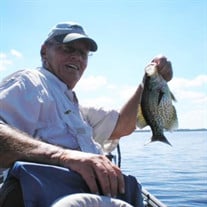 Mr. John Paul Huff, best known as Jack, passed away on Wednesday, March 3, 2021 at his residence in the company of his adoring family. John was born in Toledo, OH on Tuesday, December 19, 1933 to the late John R. and Ada (Delamotte) Huff. In 1989 he joined his wife Judy in marriage and it was at that time they began construction of their home in Perry County on the Tennessee River where John enjoyed many hours of fishing and relaxation. Together they combined their families and shared the love of seven children, all who survive. John graduated from Thomas A. DeVillbiss High School in Toledo, OH on June 8, 1951. He joined the United States Army and spent two years in service. He then journeyed on to join NEO Products a company based in Erie, MI, where he soon became President and CEO. In 1979, John developed a branch of NEO Products in Henderson, TN where he lived until settling in Jackson, TN. He retired from Neo Products after more than 50 years of leadership. John was a man of many talents but his greatest pleasure, only being second to his love for his family, was fishing. Every life path John found himself exploring always found him in his essence with a fishing pole in his hand. He was once spotlighted in an article in the Jackson Sun that dubbed him the “Patton of fishing”. He relished every moment he spent fishing. John was a very good person who sought the good in others and everything around him. He had a kind heart and an infectious smile. Although John and Judy agreed on most everything, Judy did not share a common love for Billy Joel music as John did. Survivors include his adoring wife, Judy; 2 sons, Jeff Huff and wife, Mary of Jackson, TN, and Timothy Huff and wife, Pam of St. Petersburg, FL; 3 daughters, Tammy Linnebur and husband, Brad of Temperance, MI, Debbie Szajna and husband, David of Temperance, MI, and Deanna ‘DeeDee’ Kukieza and husband, Alex of Zelienople, PA; 2 step-children, Linda Woods and husband, Freddie of South Haven, MI, and Kim Cupples and husband, Bill of Jackson, TN. 15 grandchildren, Ryan, Lucas, Lauren, Jacob, Sarah, Jennifer, Andrew, Nicole, Kyle, Courtney, Jack, Dominick, Brandy, Ashlieigh and Taylor and 11 great-grandchildren as well as many other family and friends also survive. Active pallbearers Terry Hearn, Mike Martin, Freddy Woods, Andrew Szajna, Lucas Linnebur and Jacob Linnebur. Funeral Service will be held Sunday, March 7, 2021, at 2:00 p.m. in the chapel of Arrington Funeral Directors with Rev. Ryan Potter officiating and Tom Frye contributing and burial will follow in the Ridgecrest Cemetery. Visitation with the family will be on Saturday, March 6, 2021 from 4:00 p.m. until 8:00 p.m. and on Sunday, March 7, 2021 from 12:00 p.m. until service time. The service will be webcast live via www.arringtonfuneralgroup.com. He will be missed by all who knew and loved him.

Mr. John Paul Huff, best known as Jack, passed away on Wednesday, March 3, 2021 at his residence in the company of his adoring family. John was born in Toledo, OH on Tuesday, December 19, 1933 to the late John R. and Ada (Delamotte)... View Obituary & Service Information

The family of John Paul "Jack" Huff created this Life Tributes page to make it easy to share your memories.