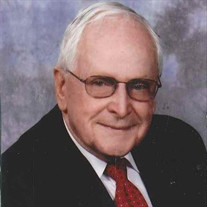 Dr. John R. Nelson, age 92 of Jackson passed away on Sunday afternoon, November 22, 2015 at Jackson Madison County General Hospital. He was preceded in death by his parents, Mr. and Mrs. T. J. Nelson, his beloved wife of fifty three years, June Highfill Nelson, and brother, Tommy Nelson. He is survived by sister, Jacqueline Perkins (Barney) of Birmingham, AL, sons, Robert (Lou Ann) and John T. (Kimberly) Nelson and grandchildren Matthew Nelson (Haley), Audrey (Harrison) Jones, Seth Nelson all of Jackson, TN and Jennifer (Quentin) Carter of Birmingham AL and six great grandchildren. Dr. Nelson was born October 29, 1923 in Vina, AL. He graduated from Vina High School, valedictorian of his class. He attended the University of Alabama, and received his DDS degree from the University of Tennessee College of Dentistry. Following graduation he returned to the Army spending time in Ft. Houston, TX. From there he went to Camp Carson Colorado where he was in charge of oral surgery. He was discharged with the rank of Captain. After 58 years of practice he retired at the age of 81 from Dental Associates where he was the senior partner. He was a longtime member of First United Methodist Church of Jackson. Dr. Nelson was a Fellow of the American College of Dentists, the International College of Dentists and the Academy of General Dentistry. He served as president of the Seventh District Dental Society, chairman of the Tennessee Section of the American College of Dentists, and was a member of the Tennessee Board of Dental Examiners for ten years. Member of the Delta Dental Board, one of the organizers and second chairman of the Southern Regional Testing Agency (SERTA), co-organizer of the Jackson Dental Study Club. He served on numerous committees of the Tennessee Dental Association. In 1995 he was named Alumnus of the Year by the alumnus of the UT College of Dentistry. Dr. Nelson loved the profession and made many trips representing the organization of which he was a part. Dr. Nelson and his wife loved to travel, oftentimes taking their grandchildren with them. He started building doll houses for his grandchildren when they were small. This eventually became his hobby. He donated many of them to various charities around town. He was a member of the Rotary Club for 56 years where he was a Paul Harris Fellow. He also served on the Youth Town of Tennessee Board. SERVICES: Funeral services will be held Friday, November 27, 2015 at 2:00PM in the chapel of Arrington Funeral Directors with Rev. Jeff Rudy and Dr. Paul Clayton officiating. Burial will follow in Highland Memorial Gardens. The family will receive friends Friday from 12:00PM until service time at 2:00PM at the funeral home. The family is requesting memorial donations be directed to First United Methodist Church, 200 S. Church St., Jackson, TN 38301, Youth Town of Tennessee, P. O. Box 1385, Jackson, TN 38302, or the charity of the donor’s choice. Arrington Funeral Directors, 148 W. University Parkway, Jackson, TN 38305. 731.668.1111. www.arringtonfuneralgroup.com.

The family of Dr. John R Nelson created this Life Tributes page to make it easy to share your memories.