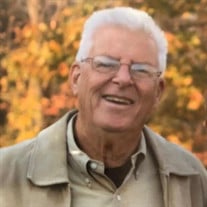 John D Hillis of Jackson, TN was born on October 30, 1944 in New York City, New York to Naomi Norris Hillis and Cecil Elexis Hillis. John was the older of 2 children; his sister Julia Linn resides in Napa, CA. In 1959, after many tough winters, he enthusiastically moved from New York to Bradenton, FL where he attended high school. John fell in love with the Florida Gulf Coast with it’s unspoiled beaches, wildlife, and fishing of all kinds. His love of fishing and a high school job at the Marine Laboratory for the Fish & Wildlife Service, led to a decision to enroll at Florida State University in 1962. While he didn’t enter the field of marine biology as anticipated, John found a successful career in retail for 33 years working for various companies in the southeast, including his role as Store Director at the Walmart Supercenter in Jackson, TN. It was during this time in Jackson that John met Shelia Buck and they married on June 12, 1993, enjoying 26 wonderful years together. After retiring from Walmart in 1997, John found enjoyment working for himself as a fence constructor and rental property owner where he learned how to build and fix just about anything. John was blessed with 3 children, Lisa Huffman (Mark), John Hillis Jr. (Michelle), and Darren Hillis (Tracy) as well as 6 grandchildren (2 from each child). John’s decision 15 years ago to accept the Lord Jesus Christ as his personal savior was the biggest and most meaningful decision of his life. His relationship with Christ enabled him to experience peace and joy as he battled Pulmonary Fibrosis for over 8 years. In addition to his love for God, John cherished time with family and friends, his dogs Fibi and Webster, traveling, genealogy, following politics, fishing, the beach, and learning new things. He was always active doing something and didn’t want to waste a single minute of the day. John passed away on October 8, 2020 at 8:51 pm at his home surrounded by his family. He leaves behind his wife, daughter, sons, grandsons, granddaughters, sister, cousins, nieces, nephews, and loyal and loving friends. John will be greatly missed and his memory forever cherished. A celebration of his life will be held at Arrington Funeral Directors in Jackson, TN on Monday, October 12th and all friends and family are welcome. Visitation will begin at 11:00am with the funeral starting at 2:00pm. The service can also be viewed at: https://www.arringtonfuneralgroup.com. Flowers can be sent to Arrington Funeral Directors, 148 W University Pkwy, Jackson, TN 38305 or donations can be made in his memory to the American Lung Association, 2452 Spring Rd SE., Smyrna, GA 30080 or The Gideon's International PO Box 173 Jackson, TN 38308.

The family of John D. Hillis created this Life Tributes page to make it easy to share your memories.