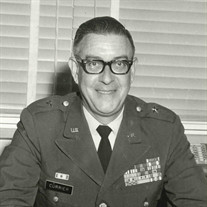 Brigadier General (U.S. Army, Retired) John W. Currier, age 90, died on Sunday, May 29, 2016 at the Jackson Madison County General Hospital. General Currier was born in Wheatland, MO on October 22, 1925, the son of the late John Woodson and Ethel Hollingsworth Currier. He was married to Elizabeth Currier who preceded him in death in March 2009. He received his Bachelor’s degree from the University of Indiana and his Master’s degree from Temple University. He served his country in the United States Army from 1941 until his retirement in 1974, holding various positions including Comptroller of the Army and obtaining the rank of Brigadier General. During his extensive career he served several tours of duty including two in Vietnam where he received a Bronze Star. After the completion of his military service, he was employed with Toyota Pacific as a Vice-President. Once retired Mr. Currier was very passionate about his yard and worked daily on its appearance. He is survived by his daughters, Vickie Currier of Jackson, TN and Kathy Currier of Honolulu, HI; a sister, Kay Isberg (Olan) of Milan, TN and a nephew, John Nelson (Bonnie) of Milan, TN. He was preceded by a sister, Wilma Nelson. SERVICES: A graveside service with full military honors will be held at 3:00 PM Sunday, June 5, 2016 at Centerville Cemetery in Medina, TN. The family will be receiving friends on Sunday, June 5, 2016 from 1:30 PM until 2:15 PM prior to the service at Arrington Funeral Directors. Arrington Funeral Directors, 148 W. University Parkway, 668-1111 www.arringtonfuneralgroup.com

The family of John Wesley Currier created this Life Tributes page to make it easy to share your memories.