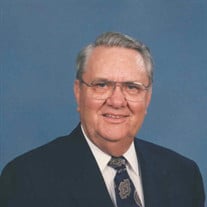 Joe Mason Pentecost, age 87, died on Tuesday, January 31, 2017 at Maplewood Healthcare of Jackson. Joe was born on August 20, 1929 in Palmersville, TN, son of the late Dessel and Alma Alderdice Pentecost. His grandparents were the late Patsy and William Alderdice and Edna and Bates Pentecost. He was a 1947 graduate of Union City High School and served in the United States Navy from 1947 through 1948. He was educated at West Tennessee Junior College/Murray State University graduating with a Bachelor’s Degree in 1950 and Memphis State University in 1967 with a Master’s Degree. He worked as a sales representative for Reelfoot Packing Co, as well as teaching high school science and vocational education at Mason Hall, Humboldt and Union City High Schools. A fifty-year resident of Jackson, Joe was an original faculty member of Jackson State Community College and served as Chairman of the Marketing and Technology Department and was the first twenty-five-year retiree. He served on the Board of Trustees for Jackson State Community College Foundation, was an Honorary Life member of the Board of the Distributive Education Clubs of America, Served on the Board of the Southern Junior College Vocational Education Accreditation Committee and was a former member of the Madison County Civil Service Commission. Sports was a big part of Joe’s life as he coached and refereed youth and High School sports-football, basketball, baseball and golf for many years. He was an avid golfer and member of the Humboldt County Club. He was a member of Campbell Street Church of Christ where he served as a Sunday School Teacher, a Deacon and as an Elder for over 25 years. He is survived by his wife of sixty-five years, Ida Lou Mayo Pentecost of Jackson; his children, Thomas Mayo Pentecost (Margaret) of Louisville, KY, Alma Pentecost Sudderth (Tim) of McKinney TX and James Irvin Pentecost (Melissa) of Jackson, TN; his grandchildren, Joseph, Nathan (Jennifer) and Aaron (Karina) Pentecost all of Louisville, KY; Jessica (Seth) Elkins and Anna (Mason) Morgan all of Little Rock, AR and Jamie (James) Manley of McKinney, TX; great grandchildren: Max, Slade, Allie and Colton Pentecost; Mason and Mallie Manley. The family asks for special thanks be given to Shervonne Fuller who helped care for Joe. SERVICE: A funeral service will be held at 2:00 PM Friday, February 3, 2017 in the chapel of Arrington Funeral Directors with Ray Hawk, minister officiating. Burial will follow in Ridgecrest Cemetery. The family will be receiving friends on Thursday, February 2, 2017 from 5:00 PM until 8:00 PM and on Friday, February 3, 2017 from 12:00 PM until 2:00 PM at Arrington Funeral Directors. Pallbearers will be grandsons and grandson-in-laws. In lieu of flowers the family asks that memorial donations be made either to the Alzheimer’s Association of Mid-South, 4825 Trousdale Drive, Suite 220, Nashville, TN 37220 or to the Nicaraguan Children’s School via the Campbell Street Church of Christ. Arrington Funeral Directors, 148 W. University Parkway 668-1111 www.arringtonfuneralgroup.com

Joe Mason Pentecost, age 87, died on Tuesday, January 31, 2017 at Maplewood Healthcare of Jackson. Joe was born on August 20, 1929 in Palmersville, TN, son of the late Dessel and Alma Alderdice Pentecost. His grandparents were the late Patsy... View Obituary & Service Information

The family of Joe Mason Pentecost created this Life Tributes page to make it easy to share your memories.