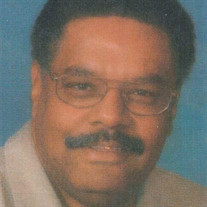 Joe Louis Murphy was the fifth of six children, born to Robert A. Murphy and Geneva (Norment) Murphy in Whiteville, TN on February 14, 1951. He attended Merry High School, where he excelled in football. He graduated on June 4, 1971. Joe Louis was known for being a hard worker. He worked eight years for the railroad, he owned a trucking company, he worked numerous years for The Jackson Sun, as well as fifteen years at Arrington Funeral Directors, from which he retired in March of 2015. Joe Louis studied the Bible throughout the years and he expressed love for his God, Jehovah. He also dearly loved his devoted wife Pamela (Harris) Murphy of twenty-four years, and his children. He was a self-sacrificing husband and father, always putting the needs of his family ahead of his own. He is survived by his wife, Pamela Murphy; seven daughters, Quenby Y. Murphy-Parker (Michael) of Georgia; Jonie L. Murphy, Mitzi M. Murphy, Shattrail N. Graves, and Dystany L. Graves all of Jackson; Tacurra L. Graves of Milan and Karisha E. Harris (Cameron) of Nashville, TN. One son; Terry L. Macon, Jr. of Union City, TN. He also leaves to cherish his memory, one sister; Josie R. Manley, and three brothers, Saint Murphy, Sr., Jeremiah Murphy, and Paul Murphy, all of Jackson, TN as well as fifteen grandchildren, a host of nieces, nephews, cousins, two aunts and many other relatives and friends. He was preceded in death by his oldest brother, William Thomas Murphy, and his parents, Geneva Murphy and Robert Murphy. Joe Louis was a special person and he will be dearly missed by his family and friends. His family finds comfort in the Bible’s promise at Revelation 21:4 that soon Jehovah God “will wipe out every tear from their eyes, and death will be no more, neither will mourning nor outcry nor pain be anymore. The former things have passed away.” Arrington Funeral Directors, 148 W. University Parkway, 668-1111 www.arringtonfuneralgroup.com

Joe Louis Murphy was the fifth of six children, born to Robert A. Murphy and Geneva (Norment) Murphy in Whiteville, TN on February 14, 1951. He attended Merry High School, where he excelled in football. He graduated on June 4, 1971. Joe Louis... View Obituary & Service Information

The family of Joe Louis Murphy created this Life Tributes page to make it easy to share your memories.

Joe Louis Murphy was the fifth of six children, born to Robert...