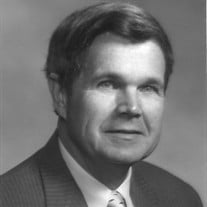 Joe B. Gaffney, 87, former Circuit Court Clerk for Madison County, died on Saturday, June 29, 2019 at Maplewood Healthcare of Jackson. Joe was born on August 19, 1931 in Jackson, TN, the son of the late Joe B. Gaffney, Jr and Marinell Hicks Gaffney. He was a 1949 Jackson High School graduate, where he served as senior class president. He married the love of his life, Carolyn Parran in 1951 and they were together for sixty-eight years. He attended Union University, where he played baseball. Joe served Madison County, TN for twenty-four years as the Circuit Court Clerk before retirement. He was a member of First United Methodist Church of Jackson. He was best described as a “People Person” during his tenure at the courthouse as he knew everyone’s name. He was active for many years with the Jackson Lion’s Club and the local Little League baseball at Lion’s field. He was an avid Sports fan especially the UT Vols. He enjoyed the game of golf and being an active member of the community. He was truly a servant to the people of Jackson and Madison County. He is survived by his wife, Carolyn P. Gaffney; a daughter, Carol Emrich (Charles); two grandchildren, Dr. Erin Chambers (Phillip) and Erica Teague (Jonathan) and four great-grandchildren, Caroline and Abigail Chambers and Mary and Anna Teague. He was preceded in death by a son, Joe B. “Chip” Gaffney IV in July 2014 and his brother, Jay Gaffney in 2002. SERVICES: A graveside service will be held on Monday, July 1, 2019 at 11:30 AM in Hollywood Cemetery, with Rev. Phillip Chambers officiating. The family will receive friends on Monday prior to the service from 10:00 AM until 11:00 AM at Arrington Funeral Directors. The family is requesting that memorial donations be directed to First United Methodist Church, “Pastor’s Fund” 200 S. Church Street, Jackson, TN 38301 or to the charity of the Donor’s Choice.

Joe B. Gaffney, 87, former Circuit Court Clerk for Madison County, died on Saturday, June 29, 2019 at Maplewood Healthcare of Jackson. Joe was born on August 19, 1931 in Jackson, TN, the son of the late Joe B. Gaffney, Jr and Marinell Hicks... View Obituary & Service Information

The family of Joe B. Gaffney created this Life Tributes page to make it easy to share your memories.