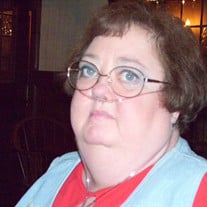 Jo Richerson Owens, born September 14th, 1947, passed away in her sleep Wednesday, October 7th, 2015 in the early morning hours. She was the daughter of Raymond Richerson Sr. (deceased) and Janice Richerson (living). She is survived by her spouse, Richard W Owens and her son, Richard W. Owens II. She has 4 grand children: Robert W. Owens, Mel Owens, Kaitlyn Mesecher and Hannah Mesecher, as well as one great-grandchild, Robert W. Owens, Jr. Her siblings are Raymond Richerson, Jr., (Sheila), Linda Culbreath (Lawrence), Jewell Burke (John) and Shirley Anthony. Jo was a devoted wife, mother and grandmother (affectionately known as “Mamaw”). She loved her Lord dearly and she loved music and spent most of her life singing. “She always left someone brighter than when she met them,” her son Richard says of his late mother. She never met a stranger, was always smiling and loved others unconditionally. Through all her illnesses she always showed the Lord’s glory and kept a positive outlook on life. Her favorite Bible passage was Psalm 100: “Make a joyful noise to the Lord, all the Earth! Serve the Lord with gladness! Come into his presence with singing! Know that the Lord, He is God! It is He who made us and we are His; we are His people, and the sheep of his pasture. Enter His gates with thanksgiving, and His courts with praise! Give thanks to Him; bless His name! For the Lord is good; His steadfast love endures forever, and His faithfulness to all generations.” (ESV) There will be a memorial service on Saturday, October 17th at 2pm at the Arrington Funeral Home, 148 W. University Parkway, Jackson, TN 38305. The dress is business casual. The family will have time aside for friends and family to have a moment to say a few words. The family asks that in place of flowers and gifts, monetary donations be made in Jo’s name that will later be donated to a local music program in honor of her lifetime love of singing and music.

Jo Richerson Owens, born September 14th, 1947, passed away in her sleep Wednesday, October 7th, 2015 in the early morning hours. She was the daughter of Raymond Richerson Sr. (deceased) and Janice Richerson (living). She is survived by her spouse,... View Obituary & Service Information

The family of Jo Richerson Owens created this Life Tributes page to make it easy to share your memories.