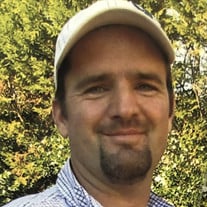 Jimmy I. Brittain, Jr., age 47, went to be with his heavenly father on Thursday, December 2, 2021. He was born in Jackson, TN on September 5, 1974, the son of Jimmy I. Brittain, Sr. and Lillian Barker Brittain. After working in the family business for several years, Jimmy ventured out on his own establishing Jimmy Brittain, Jr. Excavation and Services. Although Jimmy spent most of his time at work, he was young at heart, enjoying riding his side-by-side Razor, dirt car racing, and vacations to the beach. He had rather watch NASCAR than just about anything. His family, especially his daughters and step-sons, were his everything and there wasn’t anything he wouldn’t do for them. Jimmy is survived by his wife, Shannon Strain Brittain of Pinson, TN; two daughters, Mackenzie Brittain and Madison Brittain of Medon, TN; two stepsons, Jeremiah Richie and Noah Richie of Pinson, TN; his mother, Lillian Brittain of Jackson, TN; father Jimmy Brittain, Sr. of Jackson, TN; brother, Jake Brittain and his daughter Charlie of Medon, TN; sisters, Lydia Spencer and husband Brian and their son Lane of Medon, TN and Leslie Samples and husband Justin and their children, Carson, Miley and Duke of Adamsville, TN. SERVICES: A funeral service will be held at 2:00 PM Sunday, December 5, 2021, in the chapel of Arrington Funeral Directors, with Rev. Mark Cagle and Rev. Jack Maness officiating. Burial will follow in Ebenezer Cemetery. The family will receive friends on Sunday, December 5, 2021, from 11:00 AM until 2:00 PM at the funeral home. Pallbearers to serve will be Brian Spencer, Jeff Fuller, Jeremy Fesmire, David Armor, Donnie Matthews, and Lane Spencer. Jake Brittain will serve as an honorary pallbearer. Memorial donations can be directed to St. Jude Children’s Research Hospital, PO Box 1000-Dept 142, Memphis, TN 38148 or at stjude.org. Arrington Funeral Directors, 148 W. University Parkway, 731.668.1111 www.arringtonfuneralgroup.com

Jimmy I. Brittain, Jr., age 47, went to be with his heavenly father on Thursday, December 2, 2021. He was born in Jackson, TN on September 5, 1974, the son of Jimmy I. Brittain, Sr. and Lillian Barker Brittain. After working in the family business... View Obituary & Service Information

The family of Jimmy Isaac Brittain Jr. created this Life Tributes page to make it easy to share your memories.