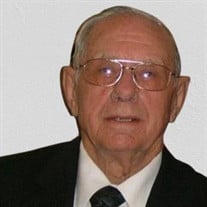 Jesse E. Smith, age 94, died peacefully on Thursday, November 25, 2021, at Jackson-Madison County General Hospital. He was born on December 24, 1926, in Memphis, TN, the son of the late Hugh and Jettie Idelle Franklin Smith. He married Jewell Smith who preceded him in death in 2011. Jesse served in the United States Army and was employed for many years with International Harvester of Memphis as a machinist. He later lived in Camden, TN for several years, where he was a member of First Assembly of God, Camden. After moving to Jackson, he attended First Assembly of God – Jackson. Jesse was a very devout Christian, who was always there when the doors were open, holding various positions such as youth leader, teacher, usher, and superintendent. He loved to travel and went to Montana with other men to assist an Indian tribe in building a church. He was a devoted husband and father, a hard worker and loved everyone he came in contact with. In Jesse’s younger years he enjoyed rabbit hunting with his beagles and watching UT football games. He always had a garden and in his later years, enjoyed his fruit orchard, working on cars, lawn movers and garden tillers. He also had cattle and was a beekeeper. Jesse is survived by his three children: Joyce Haley (Jim), Thomas D. Smith, and Terry Forbes all of Jackson, TN; three grandchildren, Lindsay Holland (Randy), Lauren Medina (Carlos) and Katherine Carmody (Jonathan); and two great-grandchildren, Alexander Medina and Ethan Medina. He was preceded in death by a grandson, Jesse Haley, one brother, and one sister. SERVICES: A funeral service will be held at 11:00 AM Tuesday at First Assembly of God - Jackson, with Pastor Garry Martin officiating. Burial will follow in Millington, TN at Northridge-Woodhaven Cemetery, with a committal service at 2:00 PM. The family will be receiving friends on Monday, November 29, 2021, from 5:00 PM until 7:00 PM at Arrington Funeral Directors. Arrington Funeral Directors, 148 W. University Parkway 731.668.1111 www.arringtonfuneralgroup.com

The family of Jesse Earl Smith created this Life Tributes page to make it easy to share your memories.