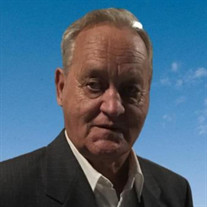 Jerry F. Poteete, age 83, died peacefully on September 16, 2021, at Jackson-Madison County General Hospital. He was born in Jackson, Madison, Co., on February 12, 1938, the son of the late Clarence Hilton and Maggie D. Owens Poteete. He served his country in the United States Army and the TN Army National Guard. He was married to Jo Poteete who preceded him in death. Jerry retired from Colonial Bread, after thirty years of service, where he worked in route sales. He had a giving heart and spent many hours volunteering with Jackson-Madison County General Hospital and several of their program areas including Camp Blue Bird and Camp Wings and community health fairs. He was always reaching out to others to help in any way he could. He was Baptist in his belief. He is survived by his children and stepchildren, Karen Mainord (Roger) of Beech Bluff, TN, Kathy Sowell (James) of Oakfield, TN, Eddie Poteete (Dana) of Jackson, TN, Scotty Daniels (Diane) of Beech Bluff, TN, Andy Daniels (David) of Little Rock, AR, Carol Ivey, Dawn Craft and David Poteete. He was preceded in death by a daughter, Debbie Angel and two brothers, Jim Poteete and Paul Poteete. SERVICES: The family will be receiving friends at Ridgecrest Cemetery on Saturday, September 18, 2021, from 12:00 PM until 1:00 followed by a graveside service at 1:00 PM. In Lieu of flowers, donations may be directed to Camp Blue Bird, c/o West Tennessee Healthcare, 620 Skyline Drive, Jackson, TN 38301.

The family of Jerry Franklin Poteete created this Life Tributes page to make it easy to share your memories.