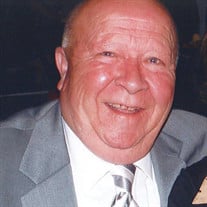 Jerry Kenneth Moore, age 79, passed away peacefully on December 3, 2020 at Jackson Madison Hospital. He was born January 25, 1941 in the City of Belmont in Gaston County, North Carolina. Jerry was the youngest son of his late parents Carl K. Moore and Dallas Henderson Moore. Brothers Harold and James Moore, sister Bonnie Moore Black, sister-in-law, Sarah France "Susie" Moore, and brother-in-law Joe Barber also proceeded him in going to glory. Jerry was a graduate of the 1959 Belmont High School Class. While in grade school he earned credit by teaching the high schoolers his drumming skills. At the early age of 13 he played drums for Jerry Lee Lewis. Jerry was also part of starting the high school band called The Stardusters. He declined a college scholarship in music to enter the entertainment business as a professional drummer with a group he created called The Sabres. Jerry also served in the Air Force as an aide to a General from 1963-1969 while he worked at WSOC-TV in Charlotte, NC as a Studio Operator. He left the TV Station in 1967 to travel as an Entertainer in the JerryKay Duo. In 1970 Jerry returned to WSOC-TV where he had a series of senior management positions with the company before leaving in 1988 to become a partner in acquiring stations in Traverse City (WGTU/WGTQ), Alpena (WBKB), Calumet (WBKP-TV) and Marquette/Ishpeming, Michigan (WBUP-TV). Jerry met his wife, Maxine, in Traverse City where he lived and managed the stations for 9 years prior to accepting a position in Jackson, TN. A 53-year television veteran, Jerry retired from WBBJ-TV, in Jackson, TN as Vice President and General Manager for 16 years. He was instrumental in developing a new state-of-the-art television station and proud of adding an additional CBS Affiliate to the current ABC Station. During his time at WBBJ-TV, Jerry served as President of the Tennessee Association of Broadcasters, where he represented the Will of the Tennessee Broadcasters in Washington, D.C. and made innovations on the better half of the Broadcasting industry. Jerry served on many boards and supported various local communities throughout his career. He was a supporter of the Carl Perkins Center for Prevention of Child Abuse and enjoyed serving on the Board of Directors at the International Rock-A-Billy Hall of Fame. Throughout his music and broadcasting career, Jerry has mentored and touched the lives of many. He was a master of lighting up the room from on stage, to studio, or directing the next show. Jerry was a close friend of Shelby Singleton, owner of Sun Records and they enjoyed each other’s company. Jerry worked and entertained with celebrities such as Frank Sinatra, Frank Jr., the Tommy Dorsey Band, Arthur Smith, Jerry Lewis (telethon), Billy Graham, Barbara Streisand, Louis Gittens, George LeCroy, Charlie Shavers, Leroy Vinnegar, Charlie Parker, the cast of Hee-Haw and many more. Growing up Jerry loved fishing and waterskiing. He collected music, loved telling jokes and stories. After retirement he enjoyed video poker, entertaining, traveling to family in Michigan and North Carolina all the while keeping his eye on politics and the government. Jerry is survived by his wife, Maxine and his four step-daughters: Romy Kochan (Chris), Natalie Hazen, Shelly Robertson (Robert) and Jennifer Casey (Jack). He has 10 grandchildren: Connor, Jentzen, Grant, Riley, Carter, Marlee, Reece, Hudson, Brendan, Harper and two great grandchildren: Korra and August. Also surviving are sister-in-laws Joan Moore, Marlene Fisher, Connie Barto, Carol Fritsch and brother-in-law Ray Schwemin. Cousins are Marty Barnes, and Barry Rumfelt, niece Linda Scronce and nephews Joey Barber, Derek and David Moore. A celebration of his life service will be held on December 16 at Arrington Funeral Directors, 1:30-3pm with a service to follow at 3pm. For those who cannot attend please visit the funeral home website for a link to view online at www.arringtonfuneralgroup.com. Interment services will be held at the Holy Cross Cemetery in Marquette, Michigan to be announced for a summer date. To honor Jerry, donations are being accepted for the Carl Perkins Center for Prevention of Child Abuse, https://carlperkinscenter.org/get-involved/what-to-donate/donate-now/ The family would like to thank the many friends, family members and business associates for sharing your kindness and memories of Jerry throughout this time. A special thanks to Kirk Newcom.

Jerry Kenneth Moore, age 79, passed away peacefully on December 3, 2020 at Jackson Madison Hospital. He was born January 25, 1941 in the City of Belmont in Gaston County, North Carolina. Jerry was the youngest son of his late parents Carl K.... View Obituary & Service Information

The family of Jerry Kenneth Moore created this Life Tributes page to make it easy to share your memories.