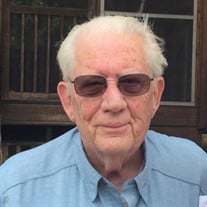 Jerry Jones Choate of Jackson, Tennessee passed away peacefully at home on June 8, 2021. Jerry was born on August 3, 1937 in Wingo, Kentucky, at his grandmother’s home. Son of Dr. J.E. Choate and Florence Marie Choate, Jerry attended Lipscomb University and then the University of Tennessee at Knoxville on a tennis scholarship, where he earned his degree in engineering. After college, he was commissioned into the Navy, where he served as the communications officer on nuclear destroyers and provided anti-submarine detection service aboard the USS Lowry. In 1962, during the Cuban Missile Crisis, he played an important role during this intense dispute by locating the subs so that depth charges could be dropped, thus forcing the Russian submarines to surface. During most of his career, he worked as an industrial engineer designing and building cotton reprocessing equipment and building textile mills throughout the U.S. as well as Asia, Central America, and South America. Some of his favorite travels were when he brought his entire family on his trips to far away and exceptional locations. Jerry met his future wife, Joyce, at the University of Tennessee. They married in December of 1960 and raised two beloved daughters. They built a life together for 61 years, living in Memphis (10 years), Monroe, LA (31 years), finally settling in Jackson, TN to be near their family. Jerry was an avid UT Vols sports fan (except when they lost). But his great passion was his several-hundred-acre farm in Wingo, KY, farmed and enjoyed by five generations of his family. After his retirement, he built a cabin and a fishing dock by the lake. The best part of his day was sitting on the dock at sunset, fishing, watching the eagles hunt and the deer graze, and sipping his favorite beverage with a contented face. He taught his grandchildren to fish and was there to help each one make their first catch. His favorite song was “7 Spanish Angels” by Ray Charles and Willie Nelson, and his favorite books were the Zane Gray series. Jerry is survived by his wife, Joyce Choate; his two daughters Alison Choate Odle (husband Bill) of Trenton, TN and Angel Choate Youngberg (husband Kevin) of Brentwood, TN; his four grandchildren: Timothy and Emily Odle and Eric and Collin Youngberg; his sister, Emily Teresa Choate (husband Cliff), and his schnauzer, Maggie. A private family service will be held at a later date. The family requests that any memorial contributions go to St. Jude Children’s Hospital, the Wingo Church of Christ, to Lipscomb University’s J.E. Choate Scholarship fund, or to a charity of your choice.

The family of Jerry Jones Choate created this Life Tributes page to make it easy to share your memories.