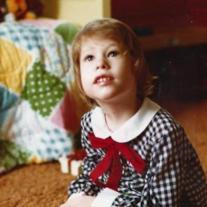 Funeral services for Jennifer Elizabeth West, 40, will be held at 2:00 Pm Monday, November 26, 2012 in the chapel of Arrington Funeral Directors with Rev. T. L. Webb officiating. Burial will follow in Gibson County Memory Gardens. Jennifer died on Friday, November 23, 2012 at her Jackson residence. A native of Jackson, she was born on June 23, 1972 the daughter of Richard G. West and the late Peggy Milford West who preceded her in 2002. Jennifer was a special child who was loved and cared for dearly. She touched many lives and talents. She was a blessing to all that knew her. She is survived by her father, Richard West of Jackson, TN; a sister, Anna Smith and husband Brian of Jackson, TN; a brother, Chip West and wife Chasity of Medina, TN; her grandmother, Virginia Milford of Milan, TN and Nephews, Jagger Evans and Liam Smith and Niece, Westlynn Smith. Pallbearers to serve will be Tom Fendley, Jim Towater, Ron Hornburger, Charles Taylor, Larry Cooper and Lynn Arnold. The family is requesting memorial contributions be directed to the Therapy and Learning Center, 32 Garland Drive, Jackson, TN 38305. The family will be receiving friends on Sunday, November 25, 2012 from 3:00 PM until 6:00 PM at Arrington Funeral Directors, 148 W. University Parkway 731/668-1111 www.arringtonfuneralgroup.com

The family of Jennifer Elizabeth West created this Life Tributes page to make it easy to share your memories.

Funeral services for Jennifer Elizabeth West, 40, will be held...